What a way to go out. Having his last ever ride, amateur Sam Waley-Cohen went out with a bang at Aintree on Saturday, steering Noble Yeats, owned by his father Robert Waley-Cohen and trained in Ireland by Emmet Mullins, to victory as a 50/1 shot in the Randox Grand National.

Waley-Cohen is likely to be best remembered as a jockey for his skill over the Aintree fences, and indeed Saturday’s victory was yet another masterclass in how to ride the course.

Noble Yeats didn’t get a great start, drifting back during the early stages as Coko Beach, Lostintranslation and Two For Gold headed the cavalry charge down towards the first stretch of fences. The field started to thin out as they came down to the Chair with the likes of Run Wild Fred and Death Duty having fallen at the Canal Turn and last year’s winning combination of Minella Times and Rachael Blackmore departing at Valentine’s Brook. Popular choice Snow Leopardess was pulled up heading out on to the second circuit, having never travelled for Aidan Coleman.

By that stage, Noble Yeats was starting to hunt into the race. As they turned on to the second circuit, Waley-Cohen had manoeuvred his partner to the inside to sit only several lengths off the pace, which was still being set by Coko Beach and Two For Gold. The horse continued to travel easily as they jumped Valentine’s and by the time they had turned into the home straight, the pair had crept into fourth.

Meanwhile, last year’s third Any Second Now was making good headway down the outside under Mark Walsh to take the lead. However, galvanised by Waley-Cohen, Noble Yeats clawed back the deficit and with the running rail to help him, assumed the advantage to pull clear for a thrilling two-and-a-quarter length success. 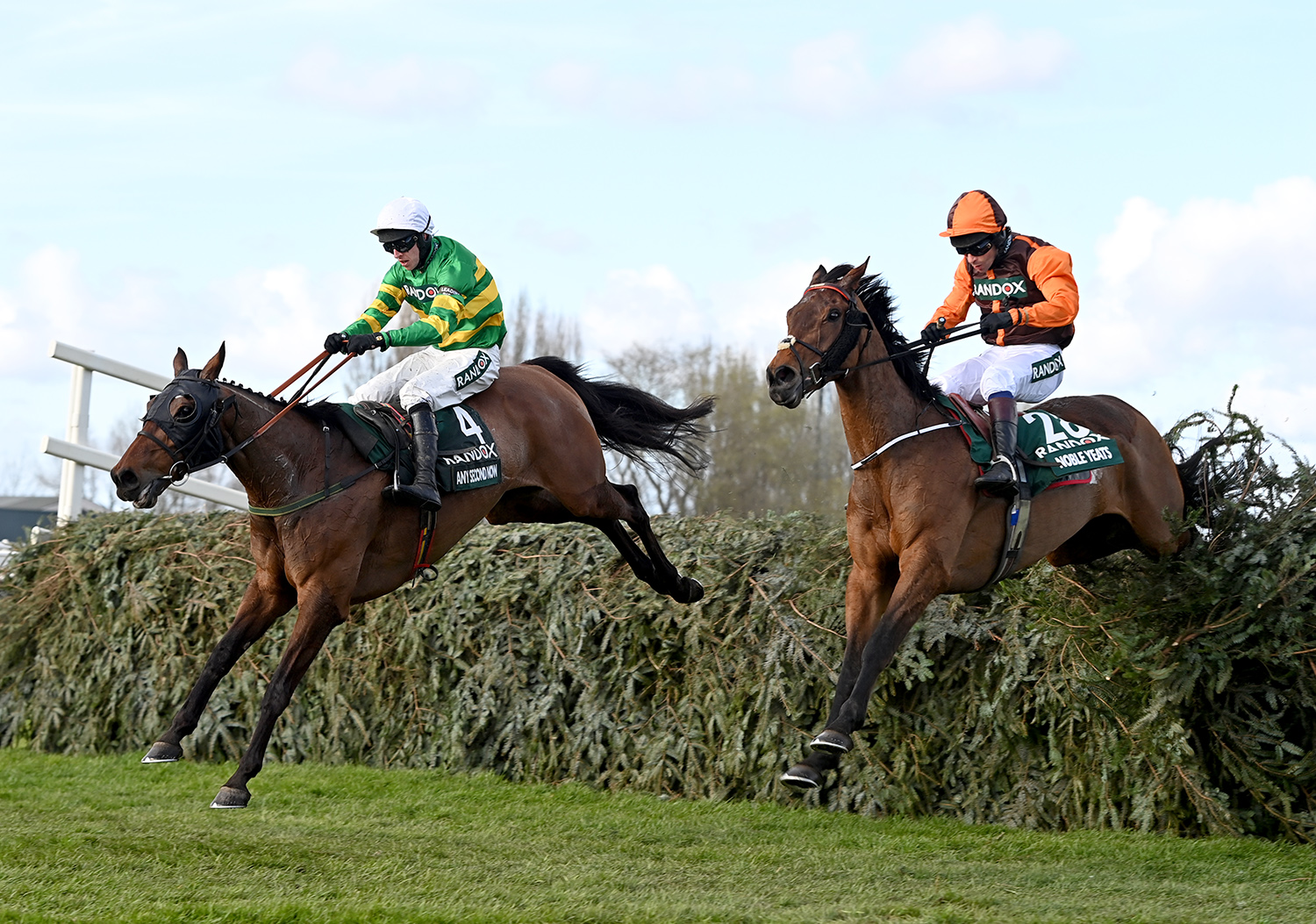 Any Second Now ran a brave race in second, 20 lengths ahead of Delta Work in third. Santini was the first British-trained horse home in fourth for Polly Gundry.

“It’s a dream,” an emotional Waley-Cohen, celebrating his seventh win over the Aintree fences, told ITV Racing. “I can’t believe it.

“It’s my last ever ride. I have so many thank yous to make. Thank you to my Dad. He’s had an unwavering belief in me for over 23 years now, there has never been a cross word and it’s been nothing but a dream. It’s beyond words, it’s a fairytale and a fantasy. I’m full of love and happiness and gratefulness.

“They aren’t all good days.  It’s about getting on the right horses, getting the luck – I do think Thomas [his late brother] is sitting on my back, I ride with his name on my saddle. These days are family days.”

Still only a seven-year-old, Noble Yeats didn’t jump a fence in public until October 5 last year when successful on his chasing debut at Galway. Then owned by Paul Byrne, he went on to run fourth in a Grade 3 novice chase at Cork ahead of several underwhelming efforts before bouncing back with a second to Ahoy Senor in the Towton Novices’ Chase at Wetherby in February – form that was franked in no uncertain terms on Friday when Ahoy Senor landed the Mildmay Novices’ Chase.

Noble Yeats changed hands to the Waley-Cohen family with this race in mind following that effort and although subsequently only ninth in the Ultima Handicap at the Cheltenham Festival, trainer Emmet Mullins never lost the faith, as he explained to ITV Racing.

“It was the long term plan and it seems to have come off in the end somehow,” said the trainer, celebrating his first winner in the race from his first attempt. “We were probably more confident a month ago. But as we got closer to it, everybody else seemed to be talking up their chances and we just went cold.

“But the horse didn’t know any different. He had good form behind Ahoy Senor – that was a great run at Wetherby – and that’s been franked, so the form was there.”

For Robert Waley-Cohen, it was understandably an emotional result.

“It’s Sam’s last ever ride. He’s 40 next Friday and he’s ridden so many good races, we’ve had such fun. It is what dreams made of.

“The horse is only seven, he’s still a novice, so he could be around for a few years yet.”

Noble Yeats’ victory in the Grand National pushed his sire, four-time Ascot Gold Cup hero Yeats, to the head of the leading jumps sires’ list. The son of Sadler’s Wells, who stands under the Coolmore banner at Castle Hyde Stud for €5,000, has also been represented this season by the Stayer’s Hurdle winner Flooring Porter and Irish Gold Cup hero Conflated.

The gelding was bred by Kristene Hunter in Ireland out of That’s Moyne, a winning daughter of Flemensfirth. 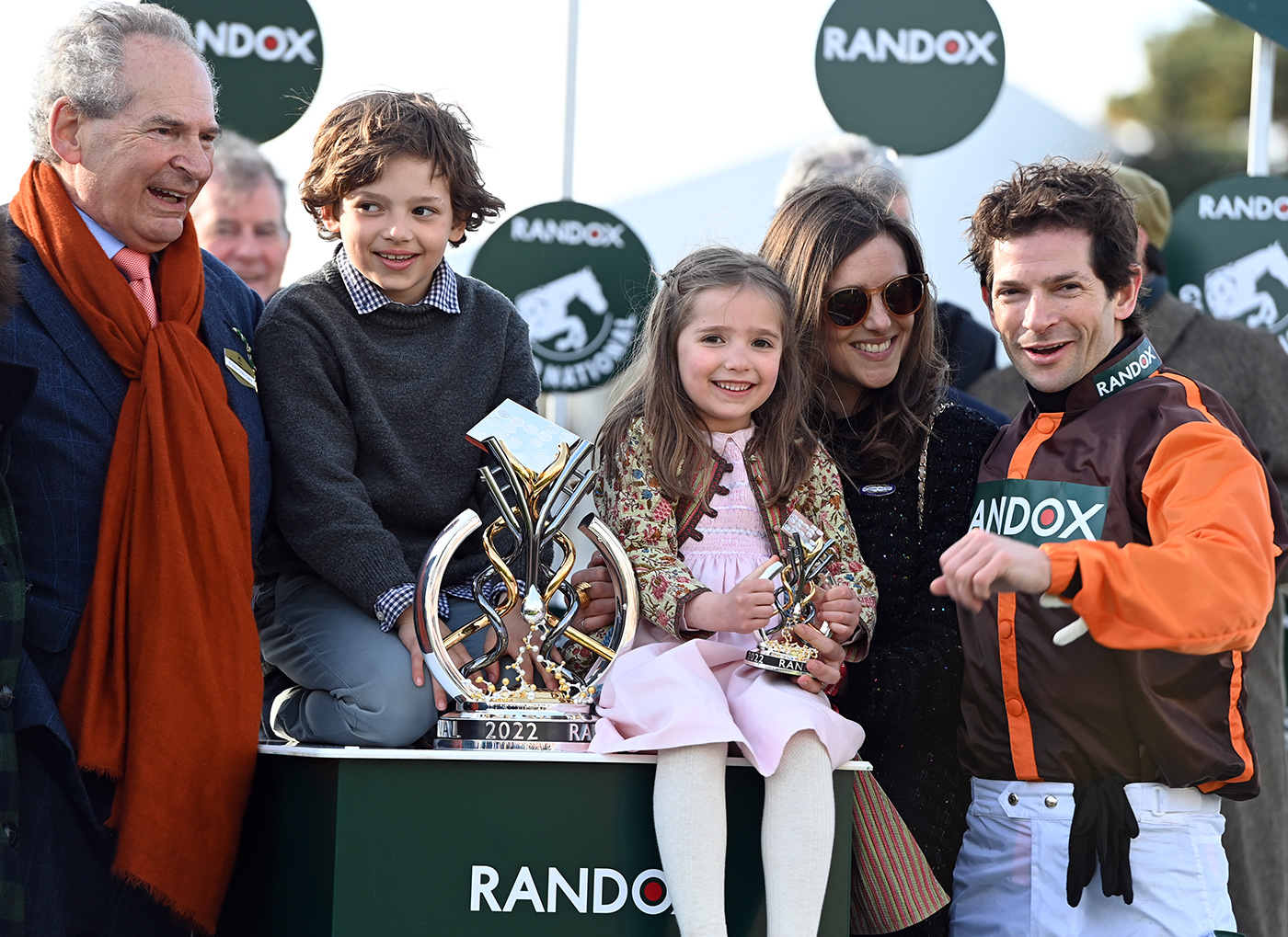 On a day of excellent Grade 1 action at Aintree, Gentleman De Mee made all the running to lower the colours of Arkle hero Edwardstone in the Poundland Maghull Novices’ Chase.

Partnered by Mark Walsh, the Willie Mullins-trained gelding got into a lovely rhythm out in front but appeared to have his work cut out as the 4/7 favourite Edwardstone ate into his lead turning in. It didn’t help that Gentleman De Mee met the second last on a bad stride, giving Edwardstone a narrow advantage. Yet Walsh still had a bit up his sleeve, and having got stuck into his partner, urged him clear for a decisive win.

“He’s brilliant,” Walsh told ITV Racing. “He’s a very forward-going horse. We tried to hold him up in his first two runs but it didn’t work, so we just let him make the running, and it suits him well as he wings fences. He just wants to get on with it.”

We tried to hold him up in his first two runs but it didn’t work, so we just let him make the running, and it suits him well as he wings fences.

Previously the 16-length winner of the Flyingbolt Novice Chase, Gentleman De Mee became the second Grade 1 winner of the week for Haras d’Etreham’s Saint Des Saints after Gelino Bello, successful in Friday’s Sefton Novices’ Hurdle. He was bred in France by A M Pommerai, Mme A Pommerai Et Al and is a half-brother to three Grade 3-winning jumpers including the classy Paul Nicholls-trained hurdler As De Mee. 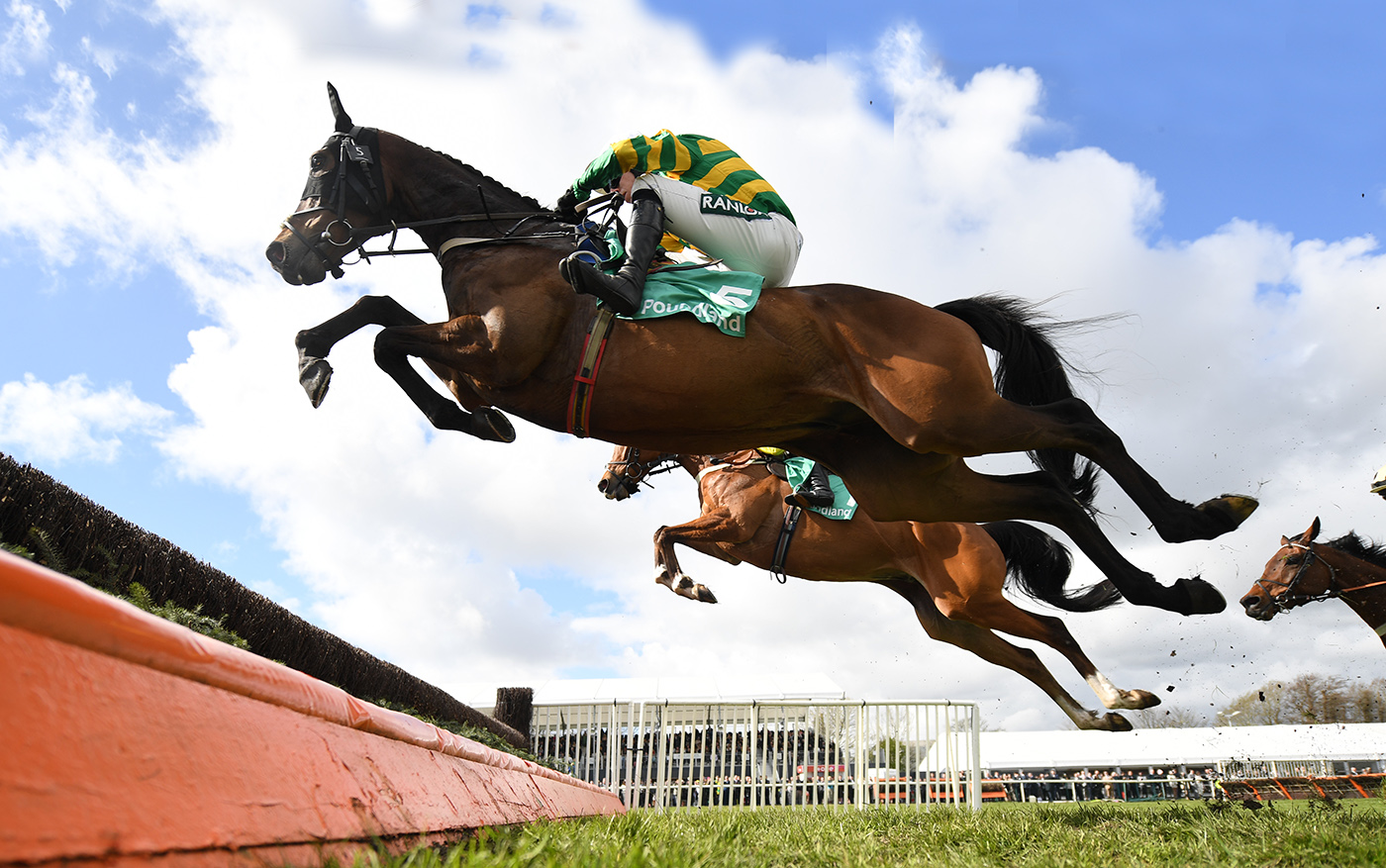 Change of luck for Elliott

Earlier on the card, Three Stripe Life had provided a welcome change of Aintree luck for Gordon Elliott when striding away to win the Grade 1 Betway Mersey Novices’ Hurdle.

Despite heading to Liverpool with a number of smart chances, the Irish trainer had drawn a blank at the meeting prior to Three Stripe Life’s assault on the Mersey Novices’ Hurdle, for which he was sent off the 5/2 favourite following three consecutive second Grade 1 placings, notably in the Ballymore Novices’ Hurdle last time out. And the gelding didn’t disappoint, coming out on top under Davy Russell following a brief tussle with Might I to score by close to five lengths.

“The lads have done a marvellous job with him at home,” Russell told ITV Racing. “We’ve always liked this horse a lot and it’s great he’s delivered at the top stage.” 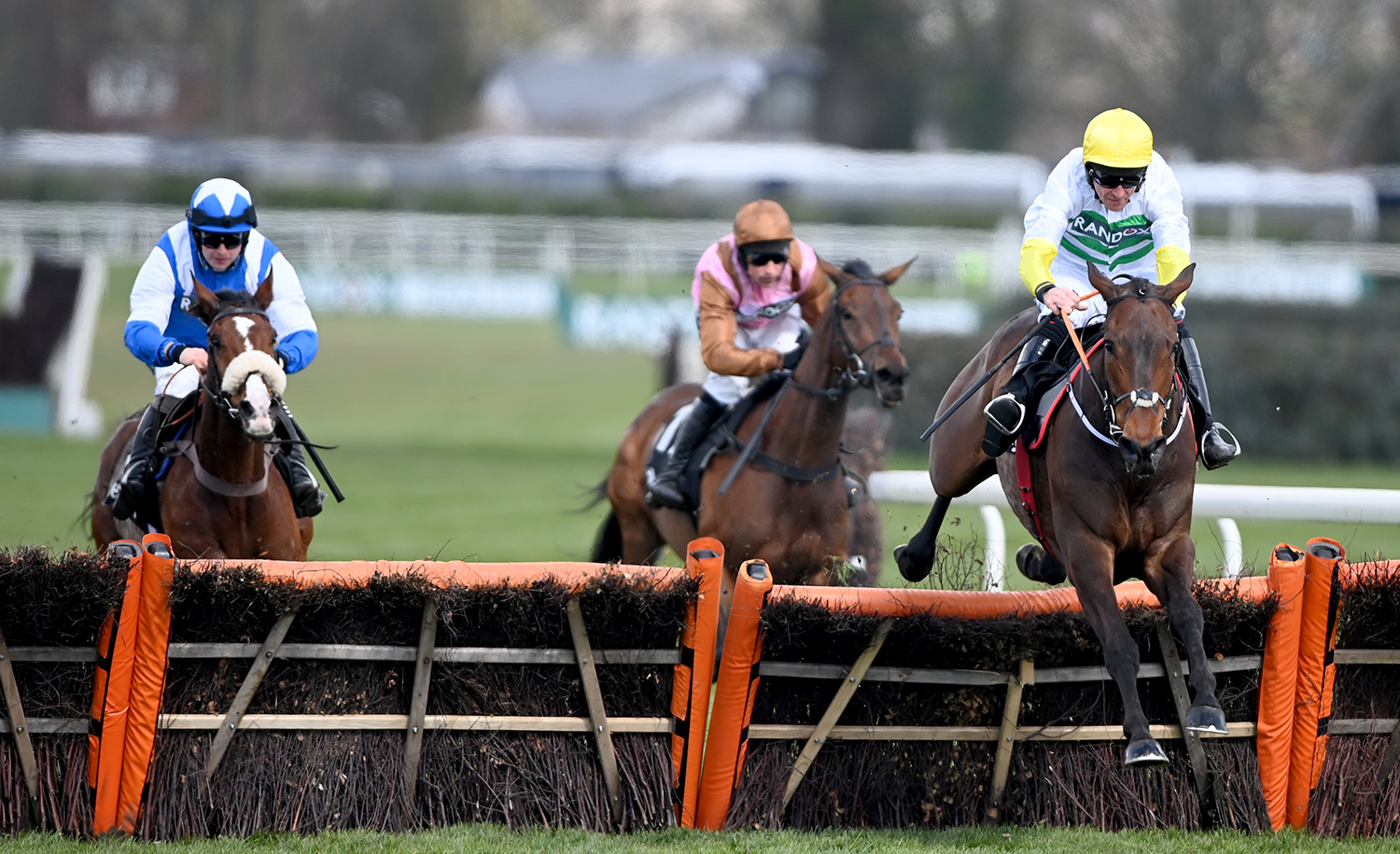 Elliott celebrated another Group 1 later on the card when Sire Du Berlais came out on top over Flooring Porter in a thrilling finish to the JRL Group Liverpool Hurdle. His win also contributed to a memorable day for owner JP McManus and jockey Mark Walsh, who had previously teamed up to win with Gentleman De Mee earlier on the card.

Flooring Porter was sent off the 11-8 favourite in light of his win in the Stayers’ Hurdle. By contrast, Sire Du Berlais had failed to fire in the Pertemps Network Final Handicap Hurdle, and therefore lined up as a 16/1 shot.

Flooring Porter assumed his customary spot at the head of affairs under Danny Mullins and had a number of them off the bridle turning in. Sire Du Berlais, however, was travelling sweetly just in behind and as Walsh got to work, locked horns with the leader, ultimately coming out on top for a clear cut success following a lengthy battle. There was a further 20 lengths back to the third Champ.

It was a fifth success for the Poliglote gelding, who was bred in France by Jean-Marc Lucas Et Al.

“He’s so tough,” said Walsh. “Fair credit to Gordon – things didn’t go right in the Pertemps and it was a brave call to run in this. He winged it round there. It just shows what a good trainer Gordon is – he had him in top shape.” 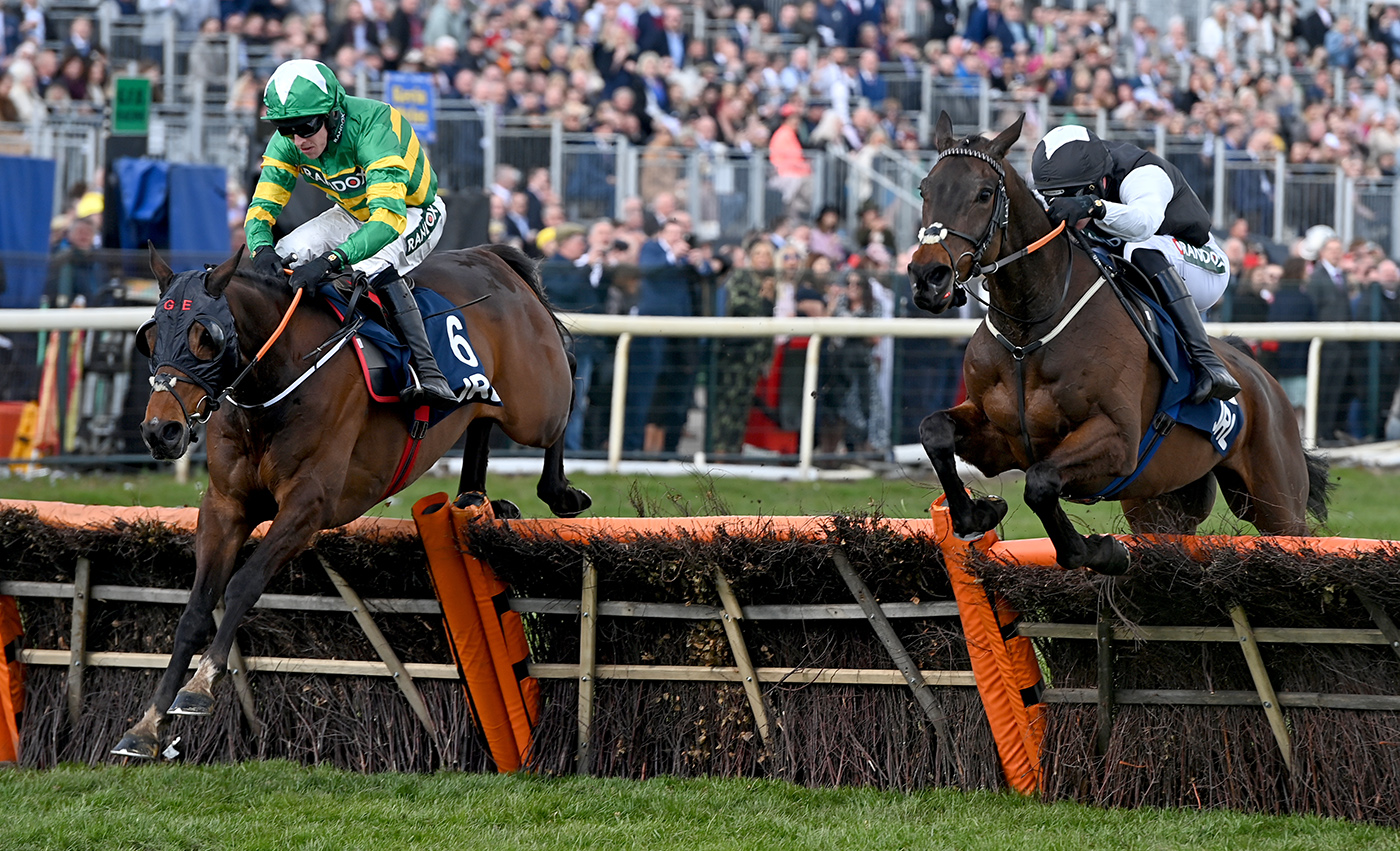 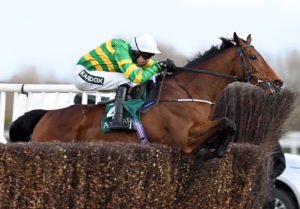 Up Next
Easy Marsh double for Fakir D'Oudairies