Annamarie Phelps, the new Chair of the British Horseracing Authority, used her address at the Racehorse Owners Association AGM on Tuesday to cover a number of topics, including the challenges faced by the sport due to changing social attitudes.

She said: “We need to live in the real world and understand that those coming of age as adults now may have very different views to their parents.

“We can see the impact in people’s views on animal welfare where racing faces a profound ethical challenge.”

Phelps, who was speaking in public for the first time since beginning her new role last month, also discussed how she wanted to support jockeys to “get the recognition they deserve along with other athletes in the country,” as well as making more of the participation of women in racing.

You can listen to Phelps’ wide-ranging address to members and industry leaders by clicking play on the link below. Her speech begins at around 42:20 minutes.

The audio also includes Nicholas Cooper, President of the Racehorse Owners Association, giving his statement to those attending. 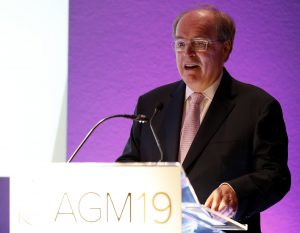 Up Next
Cooper calls for levy rethink at ROA AGM