William Buick guides son of Dubawi to victory at Longchamp

Modern Games, last seen winning the Grade 1 Breeders’ Cup Juvenile Turf at Del Mar in November, made the perfect start to his three-year-old career with a decisive victory in the Poule d’Essai des Poulains (French 2,000 Guineas) over a mile at Longchamp on Sunday.

His victory hands Godolphin another Guineas triumph and top-class performer in the three-year-old colt division following the one-two in the 2,000 Guineas at Newmarket with Coroebus and Native Trail.

Despite stumbling at the start, William Buick soon had the son of Dubawi in a prominent position just behind the leaders as outsider Texas took the field along under Clement Lecoeuvre.

Turning into the home straight and Texas was still travelling well in front, with the majority of his rivals under serious pressure, but Buick was looking confident on Modern Games.

Asked to put his seal on matters, Modern Games hit the front inside the final two furlongs and began to assert his authority on the field, galloping on strongly to record a length-and-a-quarter success over Texas, with Tribalist three-quarters of a length back in third.

Trainer Charlie Appleby, asked about his colt stepping up in trip to contest the French Derby over an extended ten furlongs, said after the race: “I asked William if he will stay further and it’s definitely worth a crack. Here on this track it was tailor-made for him.

“We’re spoilt with our colts Coroebus, Native Trail and Modern Games and it will be nice to keep them apart for as long as we can.

“It was a great ride by William – our plan was to jump and to make it and let someone take it off us.

“I was just delighted with the weather over the last few days because he loves the quick ground and once the draw came out, we just grew in confidence.”

Highclere Thoroughbred Racing’s Cachet, successful in the 1,000 Guineas at Newmarket, failed valiantly in her attempt to lift the French version, the Poule d’Essai des Pouliches (1m), finishing a narrow second to the Mikel Delzangles-trained Mangoustine at Longchamp.

James Doyle had the George Boughey-trained daughter of Aclaim at the head of affairs from the off and despite being headed a furlong out, she rallied gamely, going down by a head to Mangoustine under veteran jockey Gerald Mosse. 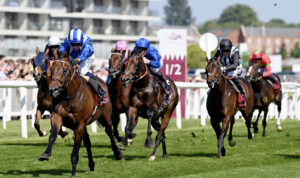 Up Next
Awesome Baaeed proves different class in the Lockinge