Andrew Thornton’s wait to reach 1,000 winners came to an end at Wincanton yesterday

The 44-year-old landed his 999th aboard Somchine in the Arnishaws Removals Mid Season Handicap Chase just shy of two miles, for one of his biggest supporters, Seamus Mullins.

A 12/1 shot, the six-year-old benefited from the falls of the two red-hot market rivals, Desert Queen and Antarctica De Thaix, the latter meeting her demise three out when 30 lengths clear.

Speaking to At The Races, Thornton said: “It’s been a hell of a journey from when I started back in 1990 working for Arthur Stephenson to think that I would be in this position now it’s what dreams are made of.”

He added: “I’ve just enjoyed the journey, there’s been ups and down, pigs and troughs but I think that’s what jump racing is all about.

“One of my first winners was for Mr Jack Hampson, it’s quite ironic really that sadly he passed away this week and wasn’t there to see it.”

Thornton’s first winner came 12 months after his first ride at Sedgefield in November 1991, for the late Jack Hampson.

Since then he has ridden in and won some of the biggest jump races in the calendar and even claimed the most prestigious of them all, the Cheltenham Gold Cup. He steered the Robert Alner-trained Cool Dawn to victory in the 1998 renewal.

Another his most notable successes in the saddle came nine years ago for Paul Nicholls when partnering See More Business to his first of two wins in the King George VI Chase.

Mullins said: “It’s a marvellous achievement for him and so nice that he did it on one of my horses and for my longest-standing owner, Ian Bare, as well. The three of us go back about 20 years or so.

“I lost a nice horse in the previous race, Western Cape, then Andrew rides his 1000th winner and when he jumped off he twisted his knee and was stood down for the rest of the day.” 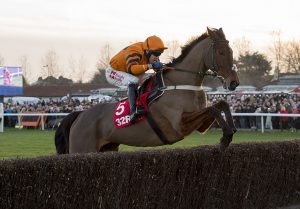 Up Next
Thistlecrack thrills at Kempton