On only his fourth chasing start, Thistlecrack put up a stunning performance to take this year’s renewal of the 32Red King George VI Chase at Kempton Park.

He took up the running under Tom Scudamore with a circuit to go racing with his typical exuberance.

His stable companion and hero of the race 12 months ago, Cue Card, moved up to be a handy second after the 12th.

After four out, Thistlecrack extended his advantage over his main market rival drawing a good seven lengths clear.

He winged the third last and steadied himself over the second last. A good jump at the last allowed Scudamore to ease the gelding down sealing a comfortable three-and-a-quarter length victory.

For an emotional Scudamore, his record on the eight-year-old now stands at an impressive ten from 11.

“First time in my life I’m pretty speechless,” reflected Scudamore. “I thought he’d do everything but I never imagined he’d ever do it as easy as that. He’s just a phenomenal racehorse, a pleasure to ride and is a great credit to everybody.”

Tizzard said: “It’s quite frightening to watch isn’t it. We’ve all seen him for the last few years haven’t we.

“He is a brilliant horse. When he’s long he can stand off, Tom was being careful at the second last and he shortened up and was like a show-jumper never touched a twig. He’s got everything you want in a racehorse.”

He’s got everything you want in a racehorse

Earlier in the afternoon, the Alan King-trained Yanworth took the step down to two miles in his stride, running out a facile winner of the Grade 1 Christmas Hurdle.

The six-year-old, owned by JP McManus, was settled on the heels of his main market rivals The New One and My Tent Or Yours for much of the contest.

Brought to the outside by Barry Geraghty on the swing for home, the son of Norse Dancer led before the last and drew clear on the run to the line to score by just over three lengths. 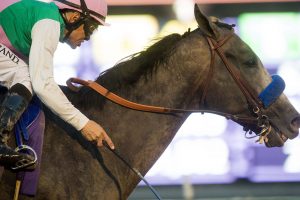 Up Next
Arrogate billed for Breeders' rematch