The one thing guaranteed to garner an even bigger roar than victory for a well-backed Willie Mullins favourite is a winner for AP McCoy at his final Festival and the Cheltenham faithful got what they longed for on Thursday with the Ryanair Chase triumph of Uxizandre.

McCoy exuded confidence from the second the tape went up, sending his Alan King-trained mount to the front and staying there throughout, with the hardy grey mare Ma Filleule leading home the chasing pack some five lengths adrift of the winner.

The seven-year-old’s victory provided the second win of the week at Cheltenham for owner JP McManus, for whom McCoy is the retained jockey.

McManus said: “It’s great to have a man like him on your side. What can I say? I’m just so happy and so pleased that he had a winner at his final Cheltenham and that we provided it for him makes it even better.

“We spoke about it last week and he said if I can get him [Uxizandre] away, he’s got loads of ability and he loves it out there in front – if he can get away and get on his own and the ground isn’t soft, I bet he’ll give them a good run for it.

“I’m just so happy for AP’s family, my family, and Alan King of course and his staff – everybody’s done a great job.”

Referring to his long-term association with the McCoy, he added: “We never signed a contract, we’ve never had anything but kind words for one another. I respect him and everything he does, on and off the racecourse.”

As McCoy was led back in aboard Uxizandre, the giant new screen in the paddock flashed up a picture of the jockey with the slogan, “We’ll miss you, AP.” The crowd packed around the winner’s enclosure certainly appeared to agree with that sentiment, giving the 19-time champion jockey the biggest cheer of the week.

He said: “I’m not going to miss riding until the end of the season when I pack up. For now I’ve got another race and the chance of another go so I’m not for one minute thinking about the future. I’m just enjoying my job, or what’s left of it.

“Cheltenham is all about winning, and while I came to this week with a few chances I knew it wasn’t going to be easy. You have to keep your head down and keep going. It’s great for JP and Noreen McManus – they are brilliant and it’s been marvellous to work for them for 10 years. He’s my boss and his wife is worried that I spent more time with him last week than she did – meanwhile, my wife was worried I was spending more time with him than with her! I’m very lucky and in a privileged position.

“The thrill this horse gave me – I will miss riding horse like this that run away with you all the way and jump like stags. It has to happen at some point so it’s a bit sad but we will worry about it this time next year.”

Trainer Alan King added: “It’s great to be part of the whole AP thing. It was a great ride and that’s the only way to ride him. We’ve been trying him over two miles to see if he was a Queen Mother horse and AP came in and said that halfway round, he wished we’d gone for that as he was travelling so well but didn’t think he’d last home.”

The final race of the 2015 Cheltenham Festival has been named the AP McCoy Grand Annual Chase Challenge Cup in honour of the winningmost jump jockey of all time, with McCoy set to ride Ned Buntline for McManus and trainer Noel Meade. 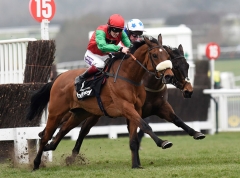 Up Next
Bullet hits the target in Queen Mother