As so often happens in races billed as duels, the Queen Mother Champion Chase didn’t fall to either of the joint-favourites – the previous two champions Sprinter Sacre and Sire De Grugy – with Paul Nicholls’ rapid improver Dodging Bullets landing the spoils from the veteran Somersby and Special Tiara. Sire De Grugy held on to take fourth but Sprinter Sacre was pulled up by Barry Geraghty before the final fence.

The second of three winners on the day for Paul Nicholls, Dodging Bullets, a son of top Flat stallion Dubawi, cruised through the two-mile contest under Sam Twiston-Davies to give the champion trainer his fifth victory in the race.

He said: “I know the other two were past champions but I couldn’t see why they weren’t behind us in the betting, it must have been on sentiment. Dodging Bullets was the progressive young horse and they usually come out on top, he should have been favourite on form. He confirmed the Tingle Creek form with Somersby.

“The horse won’t run again this season and I expect we’ll be dreaming all summer. The whole aim will be to come here again in a year’s time. We might take in the Tingle Creek along the way.”

Nicholls added: “He’s always had breathing issues and we’ve run him three times with a tongue tie and three times he has won. I never thought he was a Master Minded or an Azertyuiop but he’s winning the same races as they did now.”

A dual winner on the Flat for Andy Oliver after being bought for 8,000gns as a yearling, British-bred Dodging Bullets’ delighted breeder Frankie Dettori was on hand to celebrate with the winning connections, which include former BHA Chairman Martin Broughton.

Wearing a brown trilby borrowed from Barry Hills, Dettori said: “Sam gave him a fantastic ride – he jumped like a stag and was gutsy all the way to the line. He was bred to win the Derby but this is second best. He didn’t make very much as a yearling as his legs were pointing in the wrong direction although they got better with time.

“I watched it with the owners and my legs were shaking a little bit walking down the steps, I was so excited. It’s completely different and unusual to have those feelings when I don’t have anything to do with it. I’m so pleased for Martin and Paul.

“Sam was tactically very astute and gave the horse a great ride. I didn’t cheer too early but I did a bit once he’d pinged the second last. Riding is all about confidence and for a young man you’ve got to say that Sam is top-class.”

Dubawi wasn’t the only elite Flat sire represented by a winner at Cheltenham on Wednesday. The day’s curtain-raiser, the Neptune Investment Management Novices’ Hurdle, went the way of the Dermot Weld-trained Windsor Park, who is by Galileo out of a full-sister to Fusaichi Pegasus. He was one of three Irish-trained winners of the second day, including Don Poli – another major winner for Willie Mullins in the RSA Chase – giving the visitors the lead by eight wins to six over the home team. 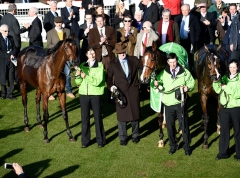 Up Next
Mullins the dominant force at Cheltenham