A trio for The New One
Stories

Maurice bows out with Cup win

Twelve months ago, Japanese raider Maurice was scooping his first Grade 1 away from his native country when winning the Hong Kong Mile on this very card.

On the final start of his career today, the son of Screen Hero came from the rear of the field under Ryan Moore to take the Longines Hong Kong Cup with supreme authority.

The five-year-old missed the break slightly and settled with only a few rivals behind in the early stages.

A Shin Hikari – an impressive ten-length winner of the Prix D’Ispahan and last year’s winner – took his 11 rivals along and under regular rider Yutaka Take went clear just over six furlongs out.

Almost eight-lengths clear turning into the straight, Moore still sat comfortably on Maurice towards the rear on the inside. The 33-year-old rider weaved his way past a couple of rivals on the rail and took dead aim at his Japanese adversary.

The duo switched out and swept by the leader 150m from home, keeping on strongly to the line to secure victory by three-lengths.

For Moore, who was just crowned 2016 Longines World’s Best Jockey for a second time in three years, Maurice becomes his second winner in this prestigious £1.2 million prize. Six years ago he swooped late on the Ed Dunlop-trained Snow Fairy to beat a high-class field.

“He really quickened. He’s a very good racehorse and he’s got better with every run. I’ve had a lot of fun riding Maurice. I’m always ok when I’m on him, although today when the gates opened, he made it a bit more difficult for me,” said Moore.

He added: “Fortunately there was a lot of pace and when I found the room I was looking for, he moved into gear and then he just flew and has won easing up.

“He’s a brilliant horse. He’s very good at a mile, but possibly he’s even better at 10 furlongs. He’s developed into a big, strong horse and he is a pleasure to ride.”

Maurice now signs off having claimed six Grade 1s between one mile and ten furlongs. His first this year came in the Champions Mile in May over this course back at a mile.

He’s developed into a big, strong horse and he is a pleasure to ride

Under Moore again he followed up at the end of October with a comprehensive victory in the Tenno Sho in Tokyo.

Aidan O’Brien’s four-time Group 1-winner took the lead from the outset and went three-lengths clear of his field into the home straight. Santono Crown – a dual Grade 2 winner in Japan – was the only horse to come out of the pack and chase him down.

The son of Marju got up to deny the favourite in the final strides to win by half-a-length, in the hands of leading jockey Joao Moreira. 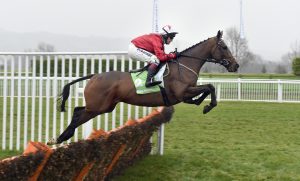 Up Next
A trio for The New One