A trio for The New One

In what turned into a damp and dreary scene at the home of National Hunt racing, The New One lit up proceedings by becoming only the third horse to take three International Hurdle’s.

The eight-year-old was sent straight to the lead under champion jockey Richard Johnson, who was deputising for the injured Ryan Hatch.

Setting a good clip, this year’s Champion Hurdle runner-up My Tent Or Yours was brought up to his quarters by Barry Geraghty just before halfway.

The New One jumped the second last one length clear of his old adversary and up the running My Tent Or Yours looked threatening to his outside.

But after getting an efficient jump at the last, the son of King’s Theatre kept on dourly with his proven stamina to win the race again by three-and-a-half lengths.

Johnson himself has enjoyed a fine record in the race down the years. Currently 41 winners clear in the jump jockeys’ championship, the 39-year-old has now been successful in the Grade 2 contest six times. His first came with Relkeel in 1997, who also notched three triumphs in the two mile and one furlong feature.

“He’s a lovely old horse and I’m very lucky to ride him today,” reflected Johnson. “Sam (Twiston-Davies) told me how to ride him and Nigel said look he definitely stays well make sure you make it a test, and from two out he just kept finding.”

With a new bit applied to help him keep straight – with the help of Olympic Medallist eventer Andrew Nicholson – his trainer Nigel Twiston-Davies did have him entered in a novices’ chase at Exeter only a few weeks ago before that meeting was abandoned.

In what could be seen as a blessing in disguise, The New One joins Relkeel and Birds Nest in becoming a three-time winner of what was formerly known as the Bula Hurdle.

Twiston-Davies said: “Everything worked out brilliantly. A day of great sadness in a way, poor Ryan Hatch it would of been his ride what a shame for him.

“We’ve now got horses at home that are faster than he is which has never happened before. The way we rode him today out in front is what he wants.”

The four-year-old son of Nickname was last seen finishing down the field in the BetVictor Gold Cup after a fourth flight blunder.

After travelling well throughout in the hands of Sam Twiston-Davies, he was ridden to lead after the last and kept on well up the hill to score by a length-and-a-half from the Venetia Williams-trained Aso. 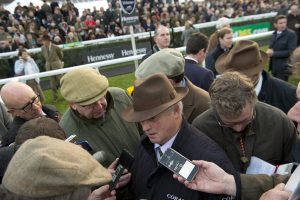 Up Next
Theatre Guide shows the way