The Sky Bet Sunday Series has been one of the better initiatives in British racing over the past couple of years, with fantastic support from ITV Racing and the good prizemoney and bonuses going the way of owners, racing professionals and yards who appreciate it and need it arguably more than most.

One such winner, on Derby weekend, was the amusingly-named Snooze N You Lose, a filly who has been wide enough awake to win a Nottingham maiden on just her second start, finish a fine second at the Dante meeting and then score again at Musselburgh in the Listed Queen of Scots Stakes as part of the track’s Sunday Series meeting.

It was a first prize well worth having too, being nearly £30,000, and the three-year-old was a comfortable two-length winner under Sam James in the colours of Melba Bryce.

The ROA member of 23 years’ standing owns and runs Laundry Cottage Stud in Hertfordshire with husband Colin, and daughters Gina – the well-known racing broadcaster – and Ailsa and son Calum helping with the family business. Their most notable produce is Group 1 winner Wootton Bassett, now a leading sire for Coolmore.

Explaining the background and setup, Melba Bryce says: “I got into owning racehorses nearly 25 years ago with my husband Colin, both of us having enjoyed a day out at the races for many years prior.

“When the kids finished up with Pony Club some 20 years ago and we had some fillies retiring from the track, we gave breeding a go and are fortunate enough at Laundry Cottage Stud Farm to have about 100 acres to keep them.

“We walk mares into stallions but do all our own foaling and prepping, having had some great help in learning the ropes in the early days from Dwayne Woods at Brook Stud.

“I’m full-time on the pastoral care side and I have two lovely young ladies, Sophie Comar and Charlotte Brandon, helping me day to day. We all muck in, including Colin, and we all take our turns sitting up and foaling down.

“Colin deals with all the matings and paying the bills and working out how to afford a new tractor and things like that.

“As the foals progress, we’re fortunate enough to be able to rely on my eldest daughter’s partner, bloodstock agent Alex Elliott, to keep an eye on condition and conformation, along with our sales consignor Jamie Railton.”

Husband and wife, though very much a team, have different silks and runners under their own names, with Melba’s colours pink, purple sash and sleeves, quartered cap, and Colin’s purple, white cross belts and armlets, quartered cap. Those silks have also been carried to Listed-race glory this year, by Joe Fanning on the Charlie and Mark Johnston-trained Tippy Toes in the Chelmer’ Fillies Stakes at Chelmsford.

Bryce says: “We usually have a couple in training, in my name or Colin’s, mostly in the UK but have had some in France with Francis-Henri Graffard.

Snooze N You Lose, who is by Ribchester and out of Wake Up Call, is trained by Karl Burke, and, explaining the connection, Bryce says: “Way back in the late 1990s when we were looking to get into ownership, we stumbled upon two little girls at a Newmarket trainers’ open day who were encouraging passers-by to come in to see their dad’s stables.

“They were Karl Burke’s now grown-up daughters and we have had horses with Karl ever since. There is no better trainer or nicer fellow in the business.

“From time to time we have horses trained by other folks and right now we have a nice Listed-class filly with Mark Johnston and another with Sean Woods [Shakenotstirred]. On the breeding side, we have worked over the years with Eamonn Reilly of BBA Ireland to help us identify likely mares and race fillies at the sales.”

As for magical moments, Bryce says: “Breeding Wootton Bassett of course has been our moment of glory, but we have also had some great fun on the racetrack, especially when winning black type, which is so important as breeders.

“Recently, Rivellino, Tippy Toes, Do Re Mi Fa Sol, Kingoverthewater and Snooze N You Lose have given us great black-type days.

“Snooze started very modestly but Karl was convinced from the beginning that when she strengthened as a three-year-old and could use her stride, she would be very useful. We will probably aim to take her to one of the Group 3 races at Glorious Goodwood, having passed on sending her to Ascot.

“We bought Tippy Toes after her two-year-old career as we had bred her mum and wanted back into the family. The idea was to run her in a Listed race while also putting her in foal. She won the Listed race but didn’t get in foal, so she will continue to run this year.”

Be it breeding or owning, turning a profit, or even just not losing that much money, is a challenge at the best of times, and especially so right now given the cost-of-living crisis.

Bryce says: “The worst thing about owning and about breeding is the disparity between the cost and the meagre return – although the utility value of a win for a horse owned or bred can offset the financial penury to a limited extent.

“And on the breeding side, folks generally don’t realise how many things can go wrong between conception and the starting gate – foals and yearlings do their best, it seems, to try to damage themselves by running through fences and the like!

“The best thing is the happy days of winning black type on the track and of foaling down on cold winter nights bringing a new prospect into the world.”

Some owners may be tempted to pass on the latter, especially during the summer months when thoughts of cold winter nights are far away, but both sentiments will certainly resonate with other owner-breeders, and in the shape of their current three-year-old fillies, the Bryces can hope for more of what Melba identities as the best elements of their racing lives. 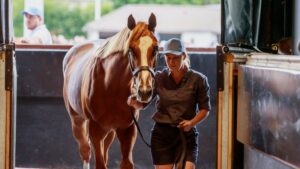 Up Next
€2.1 million brother to Sottsass heads deep Arqana trade