“He’ll come back to Japan and I hope he will win the Japanese Derby!”

Another chapter in the illustrious tale of Ecurie des Monceaux’s blue hen Starlet’s Sister was written on Sunday as the mare’s latest foal sold for €2.1 million to leading trainer Yoshito Yahagi.

His sale was the highlight of an electric evening of bidding at the Arqana August Sale, one far deeper than the elongated opening session of the day before, that featured the sale of two million euro lots and six who broke the €500,000 mark. In all, 67 yearlings were sold for an average of €233,015 and median of €140,000.

Comparative figures for the sale, which has been reformatted to accommodate yearlings alphabetically, will be provided at the end of the final session on Monday.

For Yahagi, who had saddled to Bathrat Leon to run in the Prix Jacques les Marois earlier that afternoon, the purchase provided ample justification for attending the sale. Runner-up to Godolphin on the €1.6 million Shamardal colt the previous day, he faced fierce competition from David Redvers, standing with Sheikh Fahad, this time around to force his hand all the way to the €2.1 million mark. And given the colt’s pedigree, understandably so; the eighth foal out of the Galileo mare Starlet’s Sister, he is a brother to Coolmore stallion Sottsass, winner of thee Prix du Jockey Club and Arc, and a half-brother to champion US turf mare Sistercharlie, the winner of no fewer than seven Grade 1 races, and the Grade 1-placed My Sister Nat. As such, this isn’t the first time that the progeny of Starlet’s Sister have lit up the Arqana ring, with her Dubawi filly Pure Dignity commanding €2.5 million in 2020. The filly made a winning debut in June for Roger Varian and remains held in high regard.

“I love this colt,” said Yahagi. “He has an exceptional pedigree being a brother to Sottsass and My Sister Nat, that was second behind one of my horses [Loves Only You] in the Breeders’ Cup last year. He’ll come back to Japan and I hope he will win the Japanese Derby!” 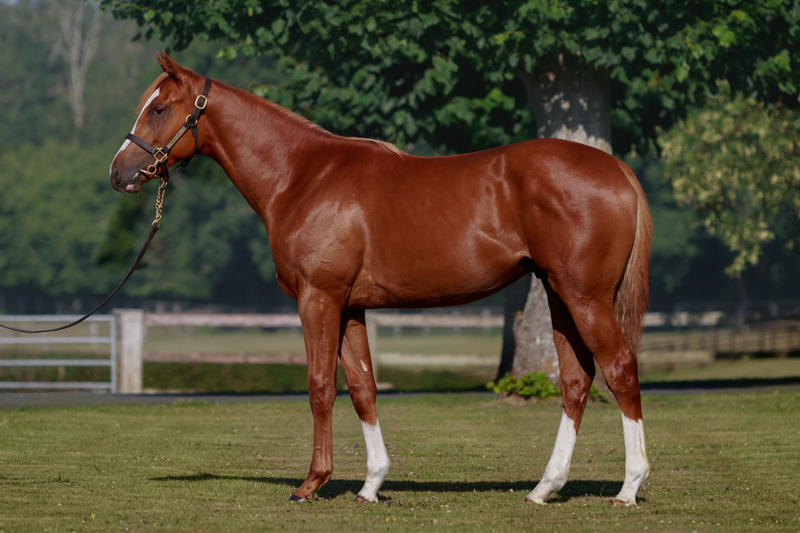 This brother to Sottsass sold for €2.1 million. Photo: Zuzanna Lupa

Yahagi also later struck at €560,000 for a Kingman half-brother to Group 2 winner Waldbiene from Domaine de l’tang. Out of the Listed-placed Observatory mare Waldjagd, the colt hails from the famous Waldrun family of Waldpark, Masked Marvel and Waldgeist.

“I don’t have any words for the moment, mainly tears of joy,” said consignor Elise Drouet. “His prep went really well. He has always been beautiful since he was born at home. We’ll follow his career closely.”

Monceaux bring their best yearlings to this sale year in year out and they were further rewarded with the sale of another Siyouni – this time a filly – for €1,400,000 to American agents Alex Solis and Jason Litt. The agents were acting on behalf of co-breeders Larry, Nanci and Jaime Roth of LNJ Foxwoods for the grey, who is the first foal out of Listed winner Aviatress, a Shamardal half-sister to Grade 3 winner Marbre Rose.

“We have known her since she was a foal, and the Roth family owns a part of her dam with Henri Bozo,” said Solis. “We’ve seen her grow up and she is an exceptional filly. It’s fantastic to get her and we didn’t want to let her go.”

Nancy Roth added: “We don’t know yet whether she’ll go to the United States. We’ll leave it to Jason (Litt) and Alex (Solis), who will know what is best. We have great memories with some of our horses in France, notably the excellent Golden Valentine who won the Prix Minerve here in Deauville.”

On what was a terrific evening for the Aga Khan Studs’ Siyouni, the stallion was also back in the limelight courtesy of a colt out of Grade 3 winner Aigue Marine from Haras de la Louviere who sold for €600,000 to trainer Nicolas Clement on behalf of Dr. Ramon Tallaj.

It was also a busy evening for agent Richard Knight, whose three purchases were headlined by a Wootton Bassett descendant of blue hen Allegretta who cost €750,000. Another high-profile yearling from Haras de la Louviere, the filly is out of the Listed-placed Ambivalence.

“She’s a stunning filly, that is for me the most beautiful in the sale,” said the agent. “I like Wootton Bassett, her dam won black-type and this is only her second foal. We really like her and she ticks all the boxes, so of course we are delighted! I’ve bought her for one of my clients and she is likely to stay in France.”

The sale concludes from 5.30pm on Monday. 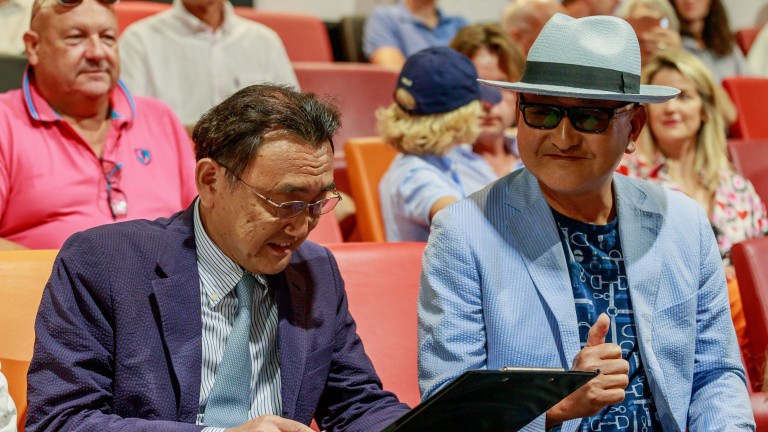 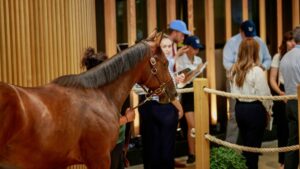 Up Next
€1.6 million Shamardal colt fires up Arqana