Dashel Drasher has been one of the brightest smiles on the face of jump racing for the past few seasons. Andrew Scutts caught up with his part-owner Bridget Tully

Dashel Drasher has been one of the brightest smiles on the face of jump racing for the past few seasons. He’s got a distinctive name, a distinguished record, especially at Ascot, and gave jockey Matt Griffiths and sire Passing Glance their first Grade 1 success.

He has carried the silks of ROA members Bridget Tully and Richard Lock with admirable zest, accumulating a CV containing ten victories and counting, including four from just five starts at Ascot, notably last season’s Ascot Chase, which was also trainer Jeremy Scott’s biggest win and just his second at the top level.

He has not been the only string on Tully’s racehorse ownership bow, but has certainly hit the bullseye plenty of times to provide some magical moments for all those connected with him.

Explaining the background to her interest in the sport and racehorse ownership, Tully says: “I had a very enriched childhood, growing up on a farm, I rode from an early age and was a member of the local pony club. From the time that my father owned a racehorse, I was hooked on the sport, taking a keen interest in the horses being trained at local stables.

“Whilst I am technically recorded as the joint owner of the horses, it is a partnership between my husband Patrick, who supports me throughout the trials and tribulations of racehorse ownership on a daily basis, and Richard and Veronica Lock, who are the best joint-owners that anyone could wish for.”

Until recently Tully’s career was in social care management and quality compliance, but she has now taken a part-time job in her local veterinary practice. Her husband is a builder, as is Richard Lock. She continues:

“A friend who was the valet for the Wessex area point-to-points was very interested in getting a pointer and invited me to go with him to Martin Sweetland’s stables to look around; after a few G&Ts we bought a pointer. Unfortunately, he severed a tendon on  one of his early runs and was put to sleep on the course.

“We quickly picked ourselves up and before long had made another purchase. However, she was too much of a lady to race and was sold as a hack.

A thirst for pointing

“This left me with a thirst for pointing and my friend not wanting to continue with the sport. Martin offered to find me an interest in a horse, which led me to Jeremy Scott’s and a mare called So Long, which he and [his wife] Camilla owned and wanted to sell two legs of. I purchased one and Richard Lock the other; up until this point we did not know each other. This was the beginning of our very lucky and exciting horse partnership!

“I say ‘lucky’ because, first, as owners we appreciate that we have been very lucky in that all of the horses we have owned have won races, and, second, the partnership works extremely well.”

Tully’s racehorse tally is now eight, with two pointers of modest ability, So Long, who won five points, Gunna Be A Devil, who was purchased in Ireland, Popping Along, Lady Longshot, Dashel Drasher and Drash On Ruby.

She says: “I have owned two point-to-pointers with Martin Sweetland, then was lucky enough to win five point-to-points with So Long. Richard Lock then bought Gunna Be A Devil and offered me a share, which my husband Patrick kindly purchased for me. We had some magical times with him, winning four chases in total.

“So Long’s first foal was Popping Along, who won three races and then sold as a broodmare; the second foal was Lady Longshot, who also had three wins and is now enjoying life at Holworthy Farm as a broodmare – these were both owned jointly with Jeremy and Camilla.

“So Long’s third foal was Dashel Drasher and her fourth Drash On Ruby, both owned outright by myself and Richard. We also own Lady Longshot’s first foal, who is now a two-year-old, as yet unnamed.”

In terms of the choice of Somerset based Scott as trainer, Tully says: “That has undoubtedly been down to the welfare of the horses and having every confidence that the horses’ care is paramount.

“I am able to sleep at night knowing that all of the horses are well cared for; they live in the most picturesque stables and have variety in their daily routines, from a splash in Wimbleball Lake, a hack on Haddon Hill, to a day’s hunting with a choice of packs. What matters to me is that the stable complex is homely, friendly and has competent staff.”

As for those magical moments, while Dashel Drasher has been a grand provider, they have come in all shapes and sizes.

Tully says: “Whilst it’s nice to win the big races, smaller races and occasions can give you as much pleasure. There have been many magical moments along the way – and enough funny stories to write a book!

“The winning of the Ascot Chase, our first Grade 1, has to be the highlight, although we were unable to be at Ascot due to Covid-19. We watched on TV and were able to shout, or was it scream, him home to our hearts’ content! We received numerous messages to congratulate us and floated on a cloud for days.

“The other magical race was the day before my 60th birthday; his win at Ascot in a novices’ hurdle was just the potion to forget my forthcoming ‘big day’ as all friends concentrated on the win rather than the day!

“When Gunna Be A Devil returned to the course after 791 days off and won his race on New Year’s Eve in 2013 was also memorable. Likewise when he won at Perth in April 2015. I was unable to go as we were at an AGM but watched it in Newmarket and then celebrated with our friends at the AGM. Richard was lucky enough to be there and I know it will be in his memory forever.

“Gunna Be A Devil’s pointing debut at Black Forest Lodge also stands out. He was well out in the lead, pulled himself up at where they started, and the jockey eventually rallied him to restart and went on to win the race!

“I should also mention when Lady Longshot eventually won a race at Fontwell after 13 starts – Richard and I just looked at each other in disbelief!”

Seeing Dashel Drasher win over hurdles at Newbury under Rex Dingle at the end of last year would not have been a surprise – he started at 4-1 despite the switch from fences – though Tully admits their hand was rather forced, while Griffiths’ absence from the saddle following a fatal car crash last October is keenly felt.

Asked for any frustrations when it comes to ownership, she replies: “As Drashel Drasher has improved the handicapper has obviously been hot on our heels, to the point that the rating he has limits the races he can fairly compete in, leading to him returning to hurdles.

“Seeing Matt Griffiths on the sidelines has also been hard as he has grown and developed with our horses, hitting all on his wishlist – a winner at Cheltenham, a winner at Aintree and a Grade 1 winner.”

She adds: “Whilst TV commentators have a tough job and have to report live, it frustrates us that the trainers and sometimes the jockeys get all the recognition, while owners do not get a mention. In Ireland they have all the details of the owners, and comment that the “horse won for Mr Jones or Smith”. Here it seems that they just say “connections”, apparently forgetting those who pay the bills.”

The bills are not inconsiderable, as any owner knows, but Tully is also quick to emphasise what owning racehorses brings, saying: “The pleasure racing gives us is untold, the people we meet, the adrenaline that the race gives, the art of horses actually racing, together with the pure skill of them jumping.”

What better note to end on, though with her current racehorses and those to come, the end of this owner’s story is hopefully a considerable number of chapters away. 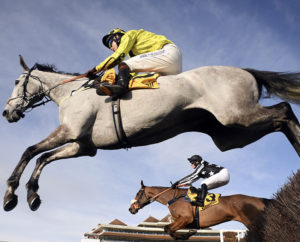