Jubilant scenes on a chilly Tuesday at Doncaster after Manintheshadows won led us to Andy Riley, an owner who embodies the phrase “thrill of ownership”!

Next time the ROA is putting together a compilation ofjubilant members advancing the cause of racehorse ownership, Andy Riley’s interview on Sky Sports Racing after Manintheshadows had won at Doncaster is almost certain to feature.

Off the cuff but genuine, the thrill of standing in the winner’s enclosure and pride in your horse having carried your silks to victory warmed the heart on a chilly Tuesday afternoon in Yorkshire.

January’s victory was the career highlight at the time of writing for seven-year- old Manintheshadows, previously a winner at Worcester this season, who is giving his owner and family and friends plenty of enjoyment.

Asked to explain his interest in racing and background, Riley replies: “I grew up in Essex and my earliest memories involve my grandad sat in front of the TV all day: Saturday, pipe in one hand and his yellow betting slips in the other watching the racing.

“Then at university in Eastbourne I lived with a group of lads that really loved their racing. They taught me everything about betting, reading the form, and as Plumpton racecourse was local, we often spent our afternoons inside the Tote hut there, deciding how to wisely invest our student grants.

“The time spent watching the racing versus going to lectures probably led to the degree result I got, much to my parents’ disappointment. However, I gained a love for the sport that has never left me.

“Plumpton was great, in the fact that you could really get close to the  fences, and seeing these wonderful animals with jockeys driving them forward was simply stunning. Moving into business, I always had staff racing days, and hospitality always seemed to involve a racecourse!”

Riley’s exposure to the thrills and spills of racing through the East Sussex course is a reminder that for every convert via the likes of Royal Ascot, the Grand National and Cheltenham Festival, there are also the important foundations for a lifetime’s love laid by small tracks right around the nation.

Manintheshadows is trained at Jackdaws Castle by Jonjo O’Neill, and Riley explains: “A good friend of mine and horse owner, Richard Evans, invited me to Cheltenham one year, which involved a visit to Jonjo O’Neill’s stable in the morning.

“As a horse lover, this could not be missed. It was there that I found out that owning a racehorse could be an option. Key points for me were that should things go wrong there were ways to walk away, the prices were not outrageous – or, indeed, at a level I imagined – and Jackdaws Castle, where Jonjo trains, was simply stunning.

“It quickly became apparent that owning a horse would be potentially good for business, from a hospitality perspective, but also allow me to fulfil a dream. I was impressed by the staff at Jonjo’s – and who couldn’t be impressed by the boss – and I liked the way they sold the experience rather than giving a false promise that your horse would be a superstar.

“The team there, including Jonjo himself, always make themselves available as they take you on the gallops and, believe me, seeing your horse galloping along at 30mph whilst you’re next to it in a Range Rover is unbelievable. The fact that they’re quick to get out the champagne also helps…”

As every owner knows, champagne, or whatever your tipple, sometimes  has to drown sorrows, rather than mark a celebration, and for Riley that realisation is part and parcel of being a good trainer, as well as a realistic owner.

He says: “I think being a trainer is not about managing horses, I would think that’s the easy bit; it’s the managing of owner expectations that must be the challenge. I have tried to be a patient horse could come first, but always believing.

“In terms of magical moments, the first time Manintheshadows ran was a highlight. My heart was beating through my chest, secretly hoping that the horse was going to show he was the next Tiger Roll whilst the brain was just hoping that he would finish! However, a good fourth at Chepstow and the dream was still alive. Hey, we got in the winner’s enclosure!

“But the first time he actually won… him striding over the last hurdle with a chance, trying to understand what your eyes were seeing, not daring to believe he would just carry on running through to the winning post, finding yourself screaming whilst everyone was trying to work out why this Class 5 conditional jockeys’ race at Worcester was so important to someone… that was magical.

“It could have been a championship race at Cheltenham, Aintree, wherever, it didn’t matter; like all the winning horses that I had seen from my grandad’s house, through university, and all the ones that had finished before mine in previous races, mine had won, come first, watched and clapped by spectators. My baby had won. That’s magic. That’s why you try to pay the bills every month.”

Another thing every owner will know is that it can be hard to resist one racehorse becoming two, and after that who knows, but for all that Riley is living the dream, as a businessman his feet are still on the ground. Does he envisage having another horse at some point?

“I certainly have the bug,” he answers. “I would love more horses but, like everything, finance comes first and Covid has been difficult for us all in many different ways.

“It’s worth pointing out that Jonjo’s yard has been amazing over that time. Being patient with payments, understanding and making life easy, that was a major plus for me. It showed what I already knew, this is more than a business for me, and they respect who they work with, both equine and human.

“I run a number of online promotional websites and enjoy a bit of freedom to get around the country with my partner Joanne and my sons, either visiting Jackdaws Castle or going to the races.

“We have made the whole experience a family one, and Jonjo was right in what he said to me the first time I inquired about owning a horse – ‘we can’t guarantee it’s a winner, but we can guarantee you’ll have fun’.

“He was right – though having a glass of champagne in my hand probably did make it sound better…!”

Riley adds: “The best thing about being a racehorse owner is an easy question to answer – it’s being close to these amazing animals, feeding a carrot not only to your horse but giving horses such as Cheltenham winner Sky Pirate a pat, watching them run and marvelling at the skill and dedication of the jockeys and stable staff. Oh, and I have Jonjo O’Neill’s mobile number! Life achievement right there!

“I know I’m lucky. My horse has won twice now as we speak, nothing major, but he has always given me a run, a reason to be happy, but I know there is an element of luck in that. I know some owners get frustrated at a lack of progress, but I had no illusions. I don’t pay the money each month for the win, I pay to be involved.

“Still the best jockey comment I’ve had was the horse’s first time over hurdles, when Jonjo jnr explained he had to work hard to control the horse as he had wanted to run round the back of the first hurdle to go jump it again! I know I am lucky to be in the sport, and there is no greater feeling than being in the middle of the parade ring.” 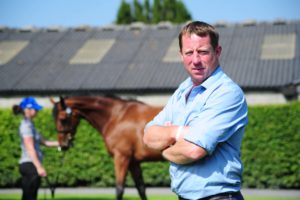