Gold Cup glory for A Plus Tard and Rachael Blackmore
Stories

Goffs will break new ground on March 23 as the host of the inaugural Dubai Breeze-Up Sale in conjunction with the Dubai Racing Club.

Staged at Meydan racecourse, the catalogue consists of 69 horses – after withdrawals – from 34 individual British and Irish vendors. They include Johnny Collins of Brown Island Stables in County Cork, who – like many consignors – sourced horses specifically with this sale in mind.

Collins has sold numerous good horses over the years highlighted by Mshawish, a mere $10,000 yearling purchase by the vendor with the rare versatility to win at Group 1 level on turf and dirt, and German Group 1 winner Khan. Various Brown Island graduates have also fared well in Dubai, notably Burj Nahaar winner Midnight Sands and the stakes-placed More Aspen and Rua Augusta.

Collins is sending two juveniles out to the Dubai Sale and here he shares his thoughts.

To read more on the sale, including insight from Tom Taaffe of Goffs, CLICK HERE.

Showtime. At 5.30pm, Henry Beeby opened proceedings in front of a deep domestic and international audience. At the end of play, the sale had turned over €8,200,409 for 52 horses sold at an average of €157,700. Plenty of vendors will use this as a real learning experience, and Johnny Collins is no different.

”It was a real learning curve for me,” he says. “A great experience and I learnt a lot, what works and what doesn’t. I’ll be back next year but I’ll do some things a bit differently. The Kodiac filly, interestingly, is coming back to England. The other horse is staying here.

”Well done to Goffs and the Dubai Racing Club. It’s an interesting concept and was very well organised. And I’ve had a lovely trip!

“Straight back home now with the Craven Sale coming up.” 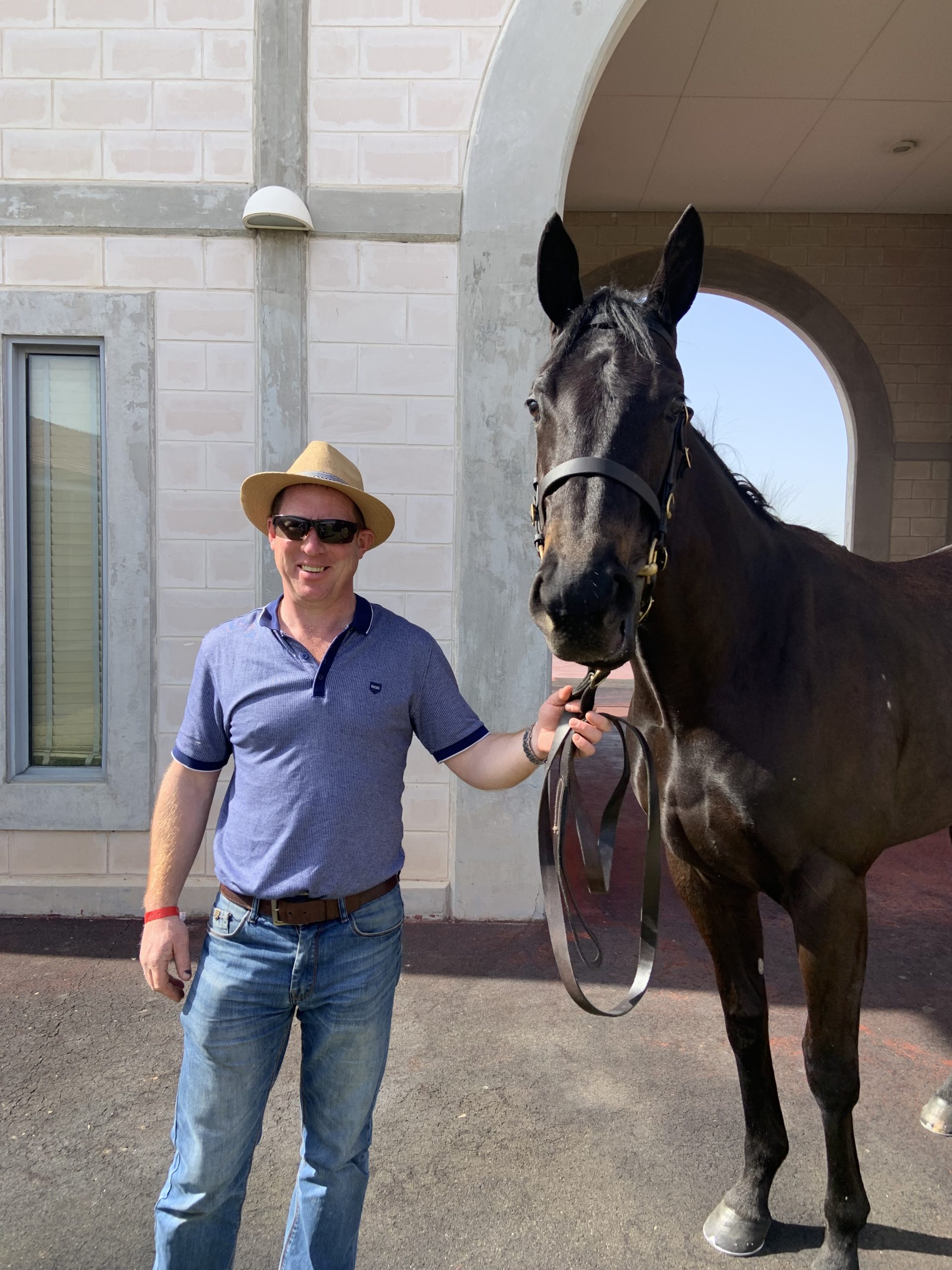 From 7.45am, 69 horses breezed in front of a deep international audience at Meydan’s training track. The breeze went extremely smoothly and most horses clearly enjoyed the Tapeta training surface. This sale is a little different from those in Europe in that the riders were asked to turn in a gentle breeze; given that it will be several months until these horses will be able to race, it’s more about the later-maturing horse rather than one that blitzes the clock and is ready to rock and roll.

Goffs’ Tom Taaffe has worked tirelessly to promote this sale worldwide and judging by the buyers in attendance, his efforts have paid off. There were a number of Dubai-based trainers in attendance as well as the likes of Charlie Appleby, Simon Crisford and Roger Varian, American-based buyers such as Chad Summers and Chad Schumer and a large contingent from Saudi Arabia; it was interesting to note how strong they were on the buying front at last week’s OBS March Sale in Florida.

Beautiful morning for the breeze ⁦@Goffs1866⁩ in Dubai. Breeze went well and good to see so many international buyers here, including a number from Saudi Arabia pic.twitter.com/JcXnELbRao

Johnny was pleased with both his horses, both of whom were ridden by Pierce Gallagher.

“I was very happy with them,” he says. “And Pierce was too, which is the important thing. I haven’t seen the video yet but on first impressions I’m pleased. It was very straightforward. The Kodiac is deceptive as she covers a lot of ground – she’s not a typical one for one of those.

“Hats off to Goffs. There are a lot of people here. I see the Saudi buyers have arrived, plenty of people from Europe, a lot of the top Dubai trainers as well. And it’s a serious facility. The breeze went off well – it’s been very well organised.

”I’ll head back to the barn, see how they cool out, and then look forward to showing them this afternoon. It’s been very busy in the yard since Sunday, there seems a great interest in the whole thing.”

The breeze takes place at 7:45am on Tuesday morning. pic.twitter.com/SdAaePJFTI

After two days in the NOFA quarantine facility, the horses were able to stretch their legs for the first time on the Meydan Tapeta training track. They included both of Johnny’s horses – the More Than Ready colt and Kodiac filly.

Johnny says: “I landed late last night and didn’t get into my hotel until 3am. We pulled out and got them on to the track from 6.30am. Pierce rode both of them and he was very pleased. They’ve both settled in grand and they were moving well this morning on the track.

“They’re going out with their lot numbers on the saddle cloths and there were a good few people out this morning watching them train, which was good to see. And a few people have already come to look at them in the yard. There was a showing window of a few hours this afternoon, and there’s another one tomorrow. 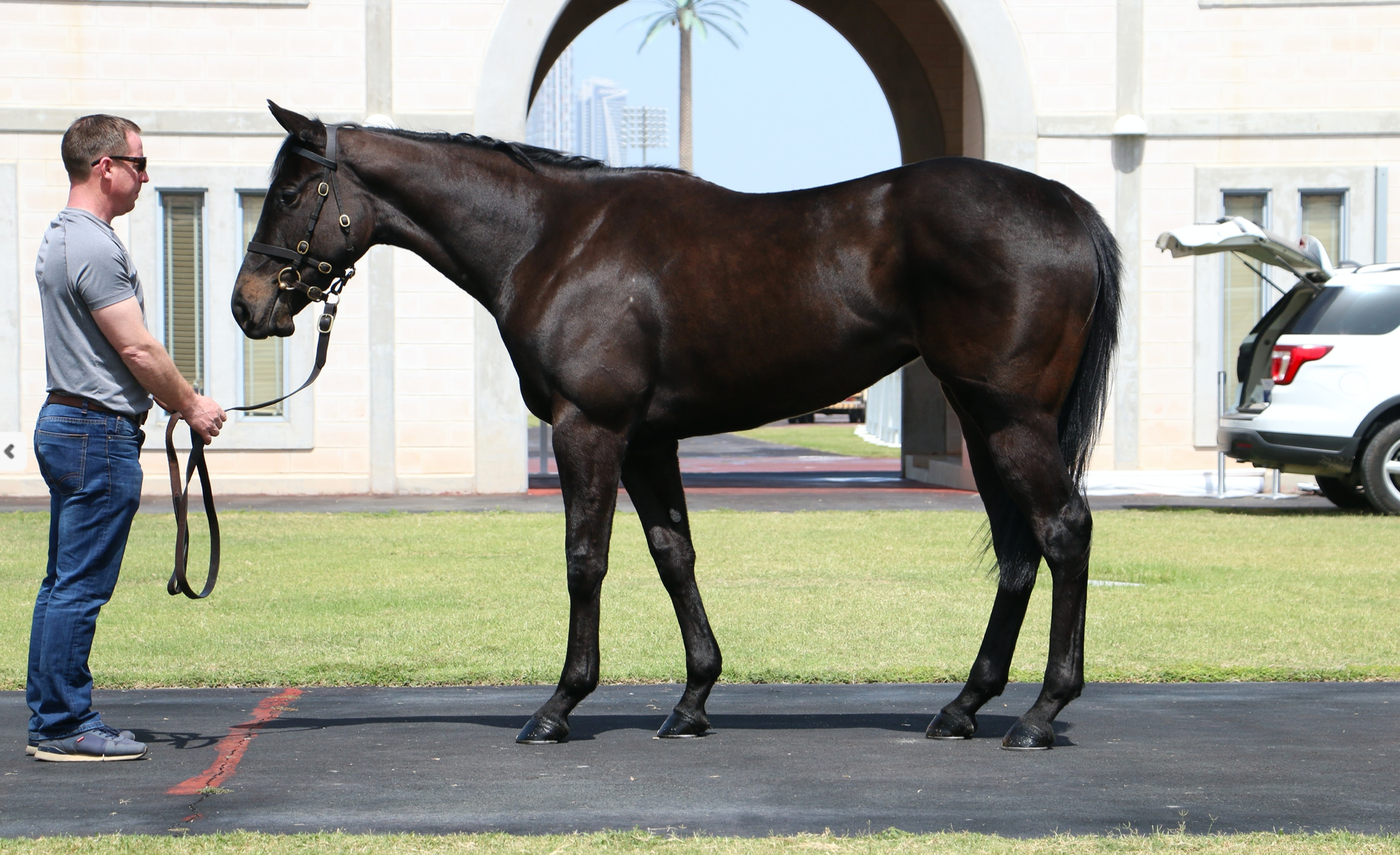 “Looking around, I can see that the consignors have brought some lovely horses – there’s some big, beautiful horses here. I’m in the Meydan hotel so I can be near the horses, and a lot of other consignors have done the same. I can tell you that everyone is very positive and there seems to be a lot of enthusiasm, so it’s all systems go.”

We had the first glimpse of the @Goffs1866 Dubai Breeze Up Sale candidates today. pic.twitter.com/bVIIn4bm1Z

In the early hours of Friday morning, a jet carrying the 69 sale-bound horses touched down in Dubai.

The British-based horses had been first to load at London Stansted. They were then flown to Shannon in Ireland to pick up the Irish horses, who had been collected from their various bases during the early hours of Thursday morning. From there under the eye of the Janah transporters, they flew to Dubai with a flight time of six hours and 38 minutes. Upon arrival, 11 horseboxes were waiting for the load, ready to transport them to the Dubai Racing Club’s quarantine facility.

One of Johnny Collins’ horses, the More Than Ready colt, is no stranger to flying having been sourced – like many others within the catalogue – at the Keeneland September Sale in Kentucky..

“They travelled out well,” he reports. “It sounds like it all went smoothly. We’ve given them electrolytes and they were ridden out this morning. [Rider] Pierce Gallagher is very happy with them, they look good, so it’s all systems go. They’ll spend two days in the NOFA quarantine facility now and we’ll get them on to the training track on Sunday. I myself fly out tomorrow.”

11 lorries await the arrival of the Dubai Breeze Up Sale horses, ready to transport them to the Dubai Racing Club (@RacingDubai) quarantine yard for some well earned rest and recuperation 💤 #DubaiBreezeUp #GoffsDubai 🇦🇪 pic.twitter.com/spOay0m14e 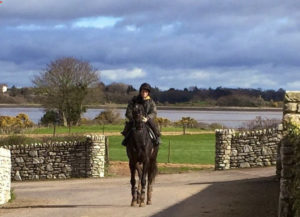 Collins is sending two juveniles out to the Dubai Sale, namely a colt by More Than Ready and filly by Kodiac.

“I’m taking two horses out to Dubai,” he says. “I’m very curious about the whole thing. I’ve sold quite a few horses out there and a couple have done really well. I had Midnight Sands, who has won six races in Dubai including a Group 3 for the Cool Silk Partnership. Dubai has been an important part of our breeze-up market for some time now and so I thought why not send a couple out there, bring the horses to them for a change.”

Few European buyers attack the Keeneland September Sale in Kentucky as hard as Johnny Collins. In a sale that invariably consists of over 4,000 entries, you can guarantee that Collins will be in the thick of the action, especially when it comes to value; for instance, neither Mshawish, Midnight Sands, Group 3-winning two-year-old Syphax or the Norfolk Stakes winners Bapak Chinta and South Central cost the pinhooker more than $25,000.

Unfortunately, Collins was unable to make it out to Kentucky last September. That inconvenience didn’t stop him from buying, however, as with several eyes on the ground he was able to secure several pinhook prospects including Lot 15, a colt by More Than Ready.

Having been unsold at $45,000, the colt was later picked up privately through Marette Farell. He was bred by Greg Goodman’s Mt. Brilliant Farm out of Durga Devi, a half-sister to Breeders’ Cup Juvenile Turf winner Wrote.

“The More Than Ready is a grand horse,” says Collins. “I actually remembered his half-brother from the year before. He was a Speightstown horse that Gay O’Callaghan had – I remember him breezing well at the Arqana Sale in Doncaster and he ended up going to Norway where he’s unbeaten in three starts [named Downtown Leo]. This lad is a fine, big colt out of a Galileo mare and I just thought he’d suit the sale.

“I’ve done well with More Than Ready. He gets good horses all over the world on all types of surfaces so he’s a horse we’ll always look at. More Aspen was by him – I bought her for $5,000 to breeze and she went on to run third in the Group 2 Cape Verdi at Meydan.”

Collins also sends over a Kodiac filly out of Chastushka who was bought for 28,000gns out of Book 2 of the Tattersalls October Sale. She is a half-sister to a winner and out of a winning two-year-old daughter of Prestige Stakes winner Sesmen.

“The Kodiac is a beauty,” says Collins. “She’s lovely, a big scopey type of Kodiac. She’s very strong, she’s done very well in the last month and I really like her. I’m looking forward to seeing what she can do.

“Pierce Gallagher usually breezes our horses and he’ll do so again – he’s a big part of our team. He flew out earlier in the week. The horses fly out on Thursday. They’re coming to collect them at 2am on Thursday morning and they’ll be taken up to Dublin where the plane carrying the British-based horses will pick them up. And then they’ll go straight to Dubai.

“They’ve had a trouble free prep and right now, it’s all about getting everything organised, getting all the bandages, hay nets, rugs etc together, everything that will go with them.

“I’m looking forward to it – it’s something that I definitely want to be a part of. I’m very excited actually.” 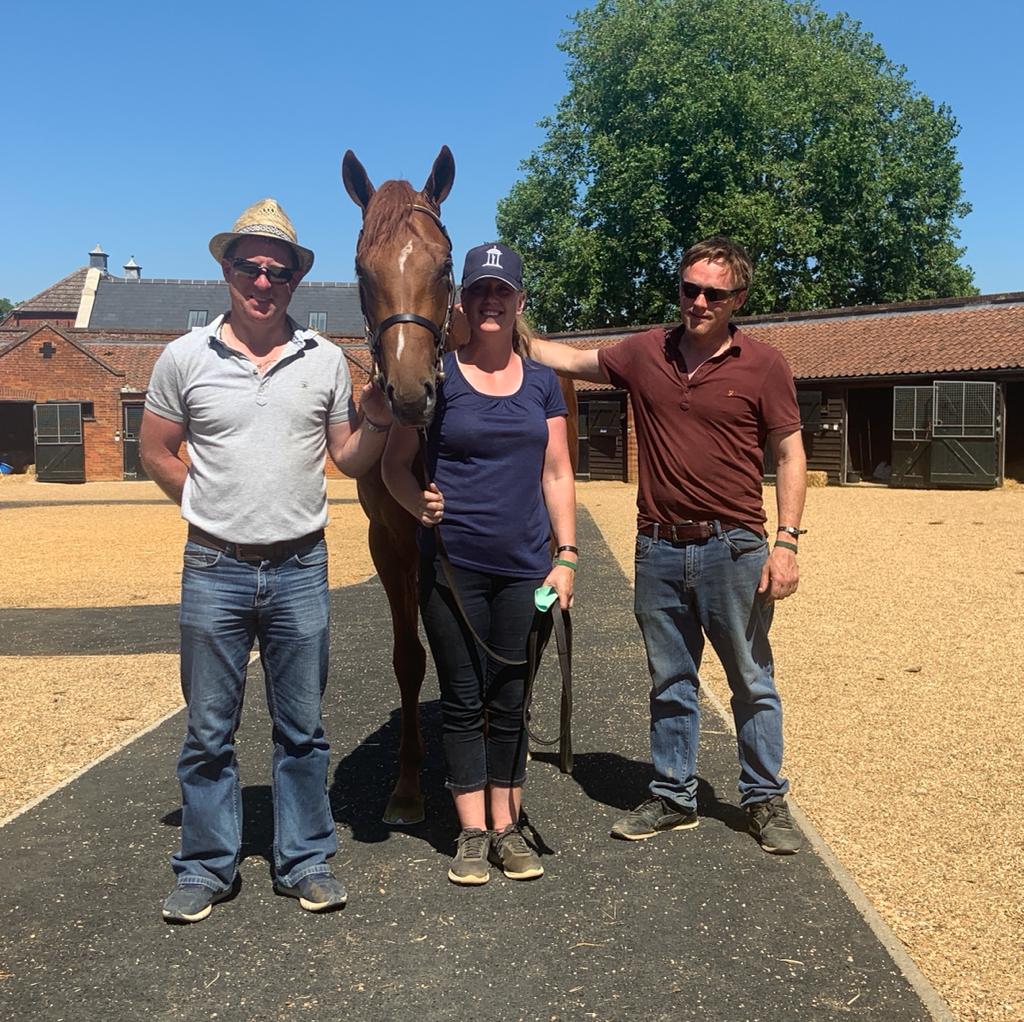 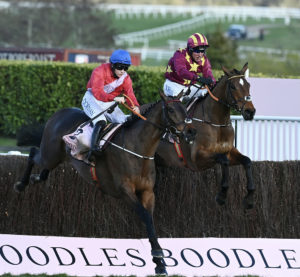