All change at Arqana
Stories

It has sadly become all too common for races instituted as memorials for some of the sport’s greatest achievers or patrons have become temporary, rather than permanent, features of the calendar. The most glaring offence in this respect has been the demise of the Anthony Mildmay/Peter Cazalet Memorial Steeplechase at Sandown, which was instituted as a mark of respect for the positive impact which those two great friends had on National Hunt racing.

Historically, while Flat racing was ‘the sport of kings’, National Hunt racing was the preserve of ‘the needy and the greedy’. Nowadays, of course, that is far from the case, with jumps racing arguably exceeding its summer counterpart in popularity, prosperity, kudos and social cachet. If any two people could be said to be responsible for the process which has seen the upgrading of the status of jump racing, then Mildmay and Cazalet were those two.

Lord Mildmay died in 1950 at the tragically early age of only 41, drowned in the sea off his Flete estate on the south Devon coast. He actually had even less time to make an impact on his sport than that would imply because he and Peter Cazalet spent the war in the Welsh Guards. He had been joint-champion amateur rider before the war, and after the war he dominated the amateur rankings until his death. However, his race-riding was only a very small part of the impact which he made on National Hunt racing: his principal legacy was the fact that he was instrumental in developing the interest of the Queen Mother (who was obviously still Queen Elizabeth at the time). As the long-term patronage of the Queen Mother can be seen as the single most important factor in National Hunt racing’s acceptance into polite society, as it were, Mildmay’s contribution should not be underestimated.

In 1949, Lord Mildmay was staying at Windsor Castle for Royal Ascot, and it was there and then that Queen Elizabeth, inspired no doubt by her guest’s passion for the winter game, decided to start owning jumpers. Mildmay was appointed her racing manager, and he duly appointed Peter Cazalet, who was training in Fairlawn in Kent, as the royal trainer. And the rest is pretty much history.

Lord Mildmay’s biographer Roger Mortimer reviewed his life thus: “When Anthony Mildmay died in 1950, his name was familiar to all who take the mildest interest in sport in this country. To the general public, he was ‘The Last of the Corinthians’, a man whose love of steeplechasing in a hard and mercenary age was based not on the profits or the adulation that success in racing brings, but on the pleasure he derived from riding a good horse fast over fences. For his determination to overcome physical handicaps, his willingness to accept the many hard knocks that came his way, the sporting public gave first their admiration, and in later years their sincere affection as well.

“Those who follow racing more closely shared the same feelings. In addition, they appreciated the extraordinary influence for good that his personality and character had exercised on the sport as a whole, particularly in the rather difficult years when steeplechasing started again at the end of the war … Anthony brought into steeplechasing not only a touch of gallantry, but a reminder that racing could be a sport and a pleasure, not just another way of trying to make some money.”

The Anthony Mildmay / Peter Cazalet Memorial Steeplechase at Sandown might be no more, but those who attended Newton Abbot’s biggest meeting of the summer will have been reassured by the prestige given to the feature race: the Lord Mildmay Memorial Handicap Chase, won this year by the Tim Vaughan-trained Stewarts House, was once just another handicap steeplechase, but is now the centrepiece of the racing year at Newton Abbot, carrying Listed status and a £40,000 prize (as well as a colossal perpetual challenge trophy).

All those who appreciate the heritage of our wonderful sport have reason to be grateful to the Newton Abbot executive for this promotion. 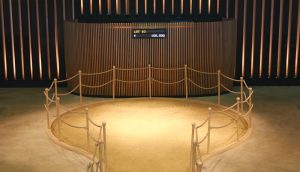 Up Next
All change at Arqana