British ranks to be boosted by retirement of Al Kazeem, Lethal Force and Havana Gold

The list of new stallions for 2014 is starting to take shape with the most recent announcement being the retirement of Prix Jean Prat winner Havana Gold to David Redvers’ Tweenhills Farm and Stud.

Bred by former ROA President Sir Eric Parker, Havana Gold, a son of Teofilo out of the Group 3-winning Deserts Style mare Jessica’s Dream and will be the third stallion at stud for Qatar Bloodstock, alongside Makfi and Harbour Watch.

An exciting new addition to the stallion barn at the Royal Studs is three-time Group 1 winner Al Kazeem (Dubawi), who ran his last race in the Prix de l’Arc de Triomphe and is to be syndicated.

Darley has at least three new stallions for the 2014 season, with champion juvenile and Classic winner Dawn Approach (New Approach) and dual Group 1 winner Farhh (Pivotal) both having been retired on QIPCO British Champions’ Day, the latter after a rousing success in the Champion Stakes. Darley also has last season’s unbeaten juvenile Reckless Abandon, by the American-based son of Danzig, Exchange Rate, and he is to stand in Ireland at Kildangan Stud along with Dawn Approach. Farhh will join the roster at Dalham Hall Stud in Newmarket.

Hopefully, two sons of Montjeu will be among the stallions joining the Coolmore team – the treble Classic winner Camelot and six-time Group 1 winner St Nicholas Abbey, who is still recovering from surgery for a fractured pastern and subsequent colic complications.

In Newmarket, champion sprinter Lethal Force (Dark Angel) and Prix du Jockey-Club winner Intello (Galileo) are two exciting new additions to Cheveley Park Stud, while Gazeley Stud has announced it is to stand its first stallion – the Lennox Stakes winner Finjaan. The son of Royal Applause, now seven, raced in the colours of Sheikh Hamdan, for whom he was also a Group-winning juvenile.

There are another two new names for Newmarket, though neither is a new retiree to stud. The 2004 Derby winner North Light and Leroidesanimaux, sire of Kentucky Derby and Dubai World Cup winner Animal Kingdom, are both being relocated from North America to stand at Kirsten Rausing’s Lanwades Stud. 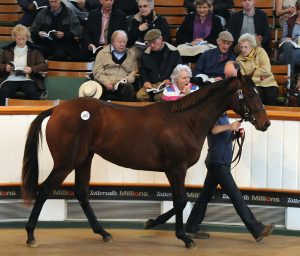 Up Next
Record-breaking Book 1 at Tattersalls