Leading Light is just that

By The Owner Breeder staff 15 September 2013

The colours were the same, as was the jockey, trainer, even the sire. Victory in the St Leger was exactly what the Coolmore triumvirate of Smith, Magnier and Tabor had been hoping for when sending Camelot to Town Moor last year in his quest for Triple Crown glory.

As history relates, he would fail by just three-quarters of a length, beaten by outsider Encke, but this year events went the right way for those same connections when Leading Light lived up to his name to carry the purple and white silks across the line in front to claim the world’s oldest Classic.

This season’s three-year-old crop has been denigrated by commentators but Leading Light’s performance can be considered to be one of the best this year by the Classic generation. Travelling with ease under Joseph O’Brien, he stalked the early leader Cap O’ Rushes before taking up the lead halfway along Doncaster’s lengthy straight to win well by a length and a quarter from the Oaks heroine Talent. Derby third Galileo Rock took the same position in the St Leger when finishing another three-quarters of a length back.

A full Coolmore team was there to welcome the hero back to scale, including Sue Magnier making a welcome but rare appearance at the races. She was flanked by her grandchildren and daughter Kate, whose husband David Wachman is the trainer of Galileo Rock.

“We thought he had a good chance in the race but you can’t be confident about winning a Classic,” said John Magnier of Leading Light, who was last seen in public prior to Doncaster when winning the Queen’s Vase over two miles at Royal Ascot. “However, we do hold him in high regard and even this morning, Aidan [O’Brien] was talking about possibly going to the Arc with him. He’s not in the race at the moment so we’d have to supplement him.

“The St Leger is one of the great races and, for me, my ultimate racing dream would be to win the Triple Crown. It was a shame that Camelot couldn’t manage it last year as everyone wanted him to win. We got a great reception from the crowd both before and after the race and the rest is history.”

Ralph Beckett, for whom Talent was a second Oaks winner at Epsom, was gracious in defeat when declaring his delight at seeing his filly return to her best with a determined showing when staying on strongly from out the back to claim the runner-up spot.

He said: “I am thrilled to bits with her and I feel like I have won because her run in Ireland was so bad and I still don’t really have a reason for it, except the ground.”

Leading Light’s victory sealed a third success in the St Leger for his late sire Montjeu, whose previous wins came via Scorpion (2005) and masked Marvel (2011). 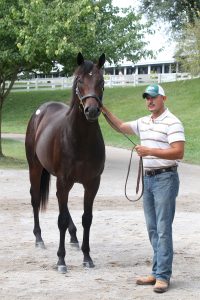 Up Next
Keeneland Book 1 closes on a high