Keeneland Book 1 closes on a high

By The Owner Breeder staff 13 September 2013

With no fewer than 18 yearlings reaching the $1 million mark or higher, the first four days of trade which comprised Book 1 of the Keeneland September Sale returned a robust set of figures which bodes well for forthcoming sales in Britain and Ireland.

“The format change has been well received by consignors and buyers alike,” said Vice President of Sales Walt Robertson. “The barn area has never been busier, and the tremendous activity at the barns is carrying over to the horses in Book 2. Consignors tell us they have been overwhelmed with buyer interest today. We see this excitement continuing throughout the remainder of the sale.”

MV Magnier, signing on behalf of Coolmore, was the successful bidder for the top lot of Book 1 – a $2.5 million son of War Front. The colt is the first foal of the During mare Blading Gold Ring and was consigned by Peter O’Callaghan’s Woods Edge Farm. The same buyer and vendor were engaged in the most expensive yearling by Galileo in the sale, a half-brother to Classic winner and leading young sire Mastercraftsman, which sold for $1.4 million.

“Mission accomplished,” said Keeneland Director of Sales Geoffrey Russell. “Our goal with the format change was to get as many high-quality yearlings and as many buyers on the grounds as possible. It worked; week 1 was a great success. Our consignors did an extraordinary job. They brought us the cream of the North American foal crop.” 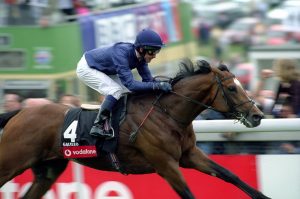 Up Next
Advance Australia fair