This year’s edition of the Group 1 King George VI and Queen Elizabeth Stakes will be run for a reduced prize fund of £400,000, Ascot racecourse announced on Thursday.

Nick Smith, Director of Racing and Public Affairs at Ascot, said: “With the deeply appreciated support of our official partner and race sponsor, QIPCO, we will be running this year’s King George at £400,000.

“In doing so, we are maintaining our policy of contributing significant executive contribution to our flagship races which began with £1.7 million being added across the Royal Ascot programme.

“We are paying executive contribution for all Pattern and Listed races, including approximately £250,000 for the King George after estimated owners’ stakes.

“We have maintained entry fees at 1.25% for the King George, rather than increasing to the new 2% limit for Group 1 races. This mirrors the policy for Royal Ascot where entry fees were maintained at the 2019 percentages at all race levels. We wish to make entering as appealing as possible for owners across the spectrum at a time where, unavoidably, prize-money nationally is having to be reduced significantly without paying crowds.

“In our case, 70% of annual income comes from racegoers’ attendance and spend. All Ascot races will have previous standard entry fees in 2020. We are very much looking forward to QIPCO King George Diamond Weekend and Enable’s hat-trick bid.”

The Group 1 Falmouth Stakes is the centrepiece at Newmarket today and this year’s edition of the race has attracted a final field of seven including Sheikh Hamdan Al Maktoum’s highly progressive four-year-old filly Nazeef.

Last seen getting the better of fellow Falmouth Stakes contender Agincourt in the Group 2 Duke of Cambridge Stakes at Royal Ascot, Nazeef will also take on Billesdon Brook, Magic Wand, One Master, Terebellum and Under The Stars.

There are Flat meetings at Bath, Musselburgh and the Curragh (Ireland) today. Racing over jumps is Market Rasen and Kilbeggan (Ireland). 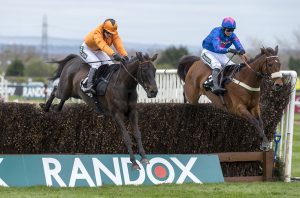 Up Next
Lizzie Kelly announces retirement