Lizzie Kelly, who became the first woman to a win a Grade 1 race over jumps, has announced her retirement from race riding after learning she and her husband, Ed Partridge, are expecting a baby.

Kelly’s headline-making success came when she partnered Tea For Two to land the Grade 1 Kauto Star Novices’ Chase at Kempton Park in 2015 and the following year, the pair combined to land the Grade 1 Betway Bowl during Aintree’s Grand National meeting.

There was also success at the Cheltenham Festival over the years for Kelly where she partnered Siruh Du Lac and Coo Star Sivola to victory for trainer Nick Williams along with victory in the Relkeel and Cleeve Hurdles on Agrapart.

She said: “I am announcing my retirement today with the news that my husband and I are expecting our first child. I will miss riding in races, the weighing room and everyone in it. Having two Cheltenham Festival winners is definitely something I will remember forever.

“The big winners are an important part of a jockey’s career; it’s what you put all your hard work and efforts into getting. The part of the job I enjoyed the most was riding young horses on their first time on the racetrack and looking after them – I got real kick out of that. I will remain heavily involved in racing and pre-training. The long-term goal is to train but I am sure there is nothing that will replace riding in races.

“I want to take the opportunity to thank the huge amount of people who have helped along the way; my husband Ed, mum and Chester, the team and all of the owners at Culverhill Farm, Rodi Green, Neil King, Ginge and the hordes of other people who taught me, helped me and encouraged me over the past 11 years.

“The girls in the weighing room who made it feel like home and the lads on the other side who were so good to me. I really have had a career that I could never have imagined, and I’ve been blessed to be associated with the horses that I have ridden.” 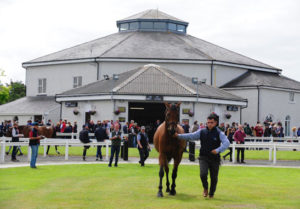 Up Next
Derby and May Store Sale postponed