The Fugue on song again
Stories

By The Owner Breeder staff 09 September 2013

When a mare of the calibre of seven-time Group 1 winner Ouija Board retires to stud, expectations are always high. One thing her outstanding race record ensured was that she would visit some of the world’s elite sires and so far the great mare has not disappointed her owner/breeder Lord Derby with a perfect four winners from four foals of racing age.

The best of these to date is also to be the one who got away. Last year, her third colt became the first of Ouija Board’s offspring to appear in the sales ring. Being by Galileo, he naturally appealed to the Coolmore buying team, who secured him for 525,000gns during Book 1 of Tattersalls’ October Sale.

Now named Australia, the bonny chestnut recorded another first when becoming the inaugural stakes winner for his illustrious mother. He burst the bubble of the highly-regarded Free Eagle in strolling to a six-length triumph in the Group 3 Breeders’ Cup Juvenile Turf Trial and is now likely to spend the winter as Derby favourite.

Australia is not Ouija Board’s sole black-type earner, however, as her first foal, Voodoo Prince, a well-named son of Kingmambo, was placed in last season’s Listed Foundation Stakes at Goodwood. He is also a three-time winner, while his half-siblings Aegaeus (by Monsun) and Filia Regina (a daughter of Galileo) have both graced the winner’s enclosure this season. Like their mother, they are trained in Newmarket by Ed Dunlop and sport the historic Derby colours of black jacket and white cap.

Galileo has already provided a Classic winner when mated with an Oaks-winning mare, his first-crop son Sixties Icon, out of Love Divine, having landed the St Leger in 2006. The turn of foot displayed by Australia gives hope that he may start his Classic campaign in the 2,000 Guineas and, being in the keep of sporting owners who came so close to Triple Crown glory with Camelot last year, the prospect of a regally-bred champion who may yet challenge for this unique sporting accolade is one we can all savour, especially through the long, cold winter ahead. 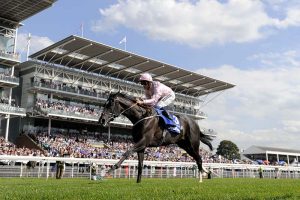 Up Next
The Fugue on song again