Just what the Doctor ordered

Newland, a 50-year-old GP who trains just 12 horses at his Worcestershire yard and combines his ‘hobby’ with running a private medical practice, was swamped in the winner’s enclosure by a raucous group of friends and family, including his three daughters.

He said: “John and I are very old friends who have been going to Aintree for 20 years and have always dreamed of having a Grand National horse. I tend to buy on spec and look for an owner but I said to someone that I’d guarantee I’d get this one sold in 60 seconds. I said to John that this could be a National horse. He asked how much and he bought the horse.”

The trainer, who won the National at his first attempt, added that he has no plans to expand his stable after his big-race success: “I’m not intending to change because I really enjoy it, it’s great fun but it’s not my primary source of income. But I think if you change that balance some of the enjoyment may go out if it. At least we have some money in the coffers to go out and buy a new horse now.

“I’m involved in a number of different businesses but they’ve all got good management teams so I’m able to float with my time. With the racing we have a good hardcore team of five people, two excellent grooms and three really good work riders.

“John and I were laughing yesterday because we have three horses. One is sadly injured, another is Pineau De Re who is running in the Crabbie’s Grand National today and the other is running in a ladies’ selling handicap hurdle at Market Rasen tomorrow. So it’s from the top to the bottom but we are happy with both.”

Scottish-born Provan, who also breeds a few horses at his home in Derbyshire, added: “I thought we could maybe win a Midlands National and Scottish National but we could only dream of winning the Grand National, it’s a dream. We decided to come here and chase the prize put up by Crabbie’s and it’s a fantastic sponsorship.”

Pineau De Re’s win was also the first victory in the Grand National for 37-year-old jockey Leighton Aspell, who retired from race-riding seven years ago. After renewing his licence in 2009, he is currently enjoying his best ever season, with 61 winners on the board.

“It’s a dream come true,” said Aspell, who was joined in the winner’s circle by his wife Nicky and three daughters.

“The feeling is just of elation when you cross the line. At my age, I won’t have many more chances to win. Every year, you share winning the National with your friends but obviously you want to do it yourself.

“You keep going through a combination of tiredness and adrenalin now. I was trying to save as much as I could but he is such a little terrier he kept swinging back into the bridle. I was very conscious about being out in front – it’s four miles and nearly four furlongs and there’s no other race in the calendar that long.

“It’s a wonderful day. This is what we do it for. I remember watching the National as a very young boy and, as much as you enjoy sharing in everybody’s success, you seek and crave a bit too. It’s great to get a chance.”

Following dramatic modification to the Grand National fences two years ago, for the second year running all horses and riders returned unscathed. Eighteen horses completed the course and there were eight fallers. 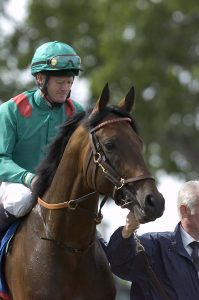 Up Next
Azamour dies at 13