The Aga Khan Studs’ homebred stallion Azamour was put down on Saturday after fracturing his pelvis in his stable. He was 13.

A son of Night Shift out of the Listed-winning Lear Fan mare Asmara, Azamour was trained by John Oxx to win six of his 12 races, including four Group 1 contests.

Successful in his only two starts as a juvenile, including the Group 2 Beresford Stakes, Azamour started his Classic campaign with a third-place finish behind Haafhd in the 2,000 Guineas at Newmarket before finishing runner-up to Bachelor Duke in the Irish equivalent. His next two outings saw him triumph in the St James’s Palace Stakes at Royal Ascot and the Irish Champion Stakes and he ended the season as he had started, finishing third to Haafhd, this time in the Champion Stakes.

The rare decision by the Aga Khan to keep a colt in training at four was rewarded by two further Group 1 successes in 2005, in the Prince Of Wales’s Stakes, followed by a return to Ascot for the King George VI and Queen Elizabeth Diamond Stakes. Azamour made his career bow in the Breeders’ Cup Turf at Belmont Park with another good Group 1 place, this time when third to Shirocco.

Retired to his breeder’s Giltown Stud in Co Kildare, Azamour’s best progeny include the Prix de Diane winner Valyra, Group 3 winner and Classic-placed Native Khan, who is now at stud in Turkey, and the Group 2 winners Eleanora Duse and Shankardeh. He is also the sire of multiple Grade 1-winning hurdler Zarkandar, a half-brother to Zarkava. 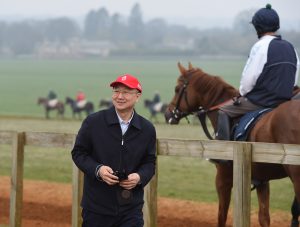 Up Next
Britain and China agree export deal