With Royal Ascot looming, the focus of the racing world is very much trained on the Flat racing spectacular but, even with jumping taking a back seat through the summer, the achievements of five-year-old hurdler Jolly Roger must not pass without comment.

The Tony Carroll trainee notched his sixth straight win over hurdles on Friday night at Aintree, having also won at the previous evening’s meeting at Hereford and on Monday at Newton Abbot.

The gelding’s winning streak started on May 13 at Uttoxeter when he landed a conditional jockeys’ handicap hurdle by seven lengths in the hands of Lee Edwards. The same margin of victory was recorded in his next win at the same track six days later, with Edwards having kept the ride throughout.

Jolly Roger was then allowed a ‘break’ of 18 days before bouncing back to win at Cartmel, this time by ten lengths. The six-race streak has been achieved by a combined winning distance of 59 lengths with the horse having started favourite or joint-favourite on each occasion.

Oratorio, sire of the versatile and consistent Jolly Roger

Jolly Roger, who also won a beginners’ chase last October, is a rare National Hunt performer for his sire Oratorio and is a member of the Coolmore stallion’s first crop. Despite being Oratorio’s winningmost jumper, he is outranked by Tidara Angel, a five-year-old mare who has won Grade 1 and Grade 2 hurdle races at Auteuil.

Sold for 110,000gns as a yearling, he is out of the unraced Sadler’s Wells mare Chalice Wells, who is a full-sister to the four-time Ascot Gold Cup winner Yeats.

Jolly Roger started life in the Newmarket stable of Jeremy Noseda, for whom he won a seller over ten furlongs as a three-year-old. Bought from that stable for just 1,500gns, he now races in the colours of Jason Tucker, with Tony Carroll being his fifth trainer.

Despite holding an entry back at Newton Abbot next week, Jolly Roger is now being given a month’s break before a crack at the competitive Galway Hurdle in July. 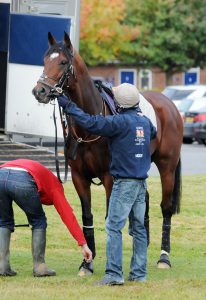 Up Next
Prescott guest speaker at TBA Awards