Pair had served on the National Hunt inspection team

Jim Rossiter and Ros Easom, who worked on Goffs’ National Hunt inspection team for over 50 years combined with the auction house, have retired from their respective roles following the conclusion of the December National Hunt Sale.

Rossiter joined Goffs in 1986 and played a pivotal role in the evolution of the Goffs Land Rover Sale since the inaugural edition of the auction was held in 1996.

Based in Wexford, Rossiter has sourced sales horses from the likes of Waterford, Kilkenny, Carlow and Wicklow including ten-time Grade 1 winner Beef Or Salmon.

Having come on board in 2000, Easom is a well-known figure in the south west Irish point-to-point scene and has been secretary of the Limerick point-to-point for many years. Among the Land Rover horses she has sourced are Cheltenham Gold Cup hero Imperial Commander and Stayers’ Hurdle winner Paisley Park.

To mark their retirement, a socially distanced presentation was made at the December National Hunt Sale to Rossiter and Easom by Goffs Chairman Eimear Mulhern, Director Nick Nugent and Bloodstock Director Ronan Griffin.

Goffs Group Chief Executive Henry Beeby said: “Jim and Ros have been stalwarts of the Goffs National Hunt team for many years and played a huge role in getting National Hunt sales at Goffs to the level they enjoy today.

“Goffs is first and foremost about two things – horses and people. Without the latter we do not get the former so the skill and charisma of Jim and Ros, combined with their huge knowledge and popularity with so many of the National Hunt fraternity, has ensured that we have fostered lasting relationships and trust with so many National Hunt vendors as they travelled countless miles to source the best horses for our sales.

“The modern-day Land Rover Sale, as well as the success of this week’s December Sale, is the culmination of an ongoing strategic investment by Goffs in our National Hunt business, or in more plain language, our people and we are indebted to Ros and Jim for their role in the evolution of Goffs National Hunt Sales.” 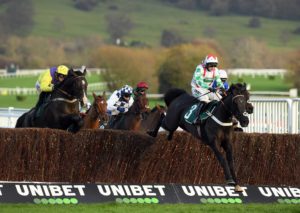 Up Next
Mister Fisher claims rescheduled Peterborough Chase at Cheltenham