Mister Fisher showed that he can act on soft underfoot conditions as he claimed the re-arranged Grade 2 Peterborough Chase at Cheltenham on Friday.

The six-year-old son of Jeremy had disappointed at Prestbury Park last month when not relishing the soft ground in the Grade 3 Paddy Power Gold Cup. That day, his jockey Nico de Boinville elected to pull him up three fences out as Coole Cody went on to win that race.

But on Friday, Mister Fisher showed he could win on that ground if necessary as he rallied when pressured by favourite Kalashnikov up the run-in to score by a length and three quarters.

His trainer Nicky Henderson said after the race: “He was pulled up in the Paddy Power and that was a combination of his first run and on very, very soft ground, but this is harder work than I’d hoped for.

“We kept him out of the Caspian Caviar, and this was the right race for him. Being up there with a bit of daylight suited him and they went a good gallop all the way. He jumped great too. He’s learning and looks like a young horse on the up.

“Nico says Ryanair and I’ll go with that. I won’t wrap him up and put him away. He’ll run again but he wants a spring campaign rather than a winter campaign.”

Having produced a magnificent round of jumping from the front, the Kerry Lee-trained Storm Control had the Grade 3 Unibet Handicap Chase at his mercy, as the seven-year-old cleared the final fence two lengths clear of his rivals.

But the race was far from over as Storm Control began to hang markedly left and idled up the run-in. That gave Potters Legend and Court Maid the chance to catch up and press the leader, only for Storm Control to find a late burst of speed to deny the pair.

Jockey Richard Patrick said: “He jumped the last and we got to the turn where you go out and he wanted to go around again. He thought he’d done enough but when he heard the others come to him, he really dug deep and went away again. His jumping wins it for him. He is an absolute joy to ride.”

First winners at Cheltenham for Ben Harvey and Alan Johns

Jockeys Alan Johns and Ben Harvey were celebrating on Friday as they both partnered their first winners at the iconic racecourse.

It was Johns who got on the board first when he guided the Tim Vaughan-trained Madera Mist to a shock success in the CF Roberts Electrical & Mechanical Services Mares’ Handicap Chase.

Later on it was amateur Ben Harvey’s turn as he partnered the John McConnell-trained Some Neck to victory in the Glenfarclas Cross Country Handicap Chase to deny Defi Des Carres in the shadow of the post.

Harvey said: “That was brilliant – it was the ultimate for me. Winning a cross-country race around here is brilliant. I had a willing partner underneath me, which always helps. All he does is gallop and he is tough and really genuine.

“Cheekpieces gave me a hand today to help ride a race on him. I thought I was going to have to settle for second to be honest, but he just kept finding for me. It’s my first visit here and first winner, it’s brilliant.” 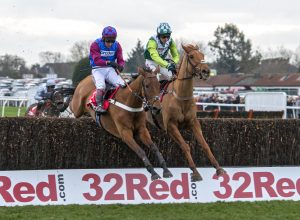