Tylicki back on horseback
Stories

Oxfordshire-based trainer Ben Case will be hoping to etch his name onto Cheltenham Festival gold next month with his improving mare Midnight Jazz, one of the leading British hopes for the OLBG Mares’ Hurdle on the opening day.

A daughter of the late Midnight Legend, the seven-year-old nearly caused one of the biggest upsets of the season when going down by a head to Vroum Vroum Mag in the Grade 2 Doncaster Mares’ Hurdle last month.

That day at Doncaster, a track where she won at earlier in the season, Midnight Jazz kicked for home swinging into the straight and looked to have the Willie Mullins-trained mare in trouble after three out.

The latter eventually reduced the deficit and the pair were locked together inside the final furlong. In a finish of heads the Irish challenger just got there to win by a head.

“It gives you encouragement that we could finish that close to Vroum Vroum Mag whether she was right or not. It definitely gives us hope that we can go there and get in the money,” said Case.

“Of course I was surprised but on the ratings we should of finished second and it would of probably been easier to take if we had been beaten three or four lengths.”

Case, who started training back in 1999, has tasted success at the Aintree and Punchestown Festivals but not the March showpiece yet. Tempest River, another of his mare’s, won the Listed Mares’ Bumper at the 2011 Grand National meeting for the Fly Like The Wind Partnership.

Deep Trouble made a successful trip across to the Punchestown Festival in 2014, running out a comfortable winner of a competitive handicap hurdle in the hands of Noel Fehily.

Case continued: “She’s in good form and I’m really happy with her. In her box and everything she’s like an old donkey but she’s quite a feisty mare to ride. Once she gets her head in front she is quite difficult to pass.

“Obviously Apple’s Jade and Limini were impressive the other day and there’s a few other Irish horses and looks on paper that they’ve got a stronger hand than the English horses.”

Midnight Jazz is in fact out of one of the yard’s winning hurdlers Ring Back, whose final victory in a maiden hurdle at Towcester came under Sir Tony McCoy.

She is currently around a 16/1 shot for the two mile-and-a-half prize, with favouritism shared by the Willie Mullins pair Limini and Vroum Vroum Mag at around 7/4. 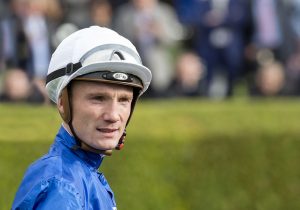 Up Next
Tylicki back on horseback