Tylicki back on horseback

Freddie Tylicki found himself back in the saddle for the first time since suffering a horror fall which left him with paralysis in the lower half of his body.

Accompanied by his mother Irene and sister Madeleine, the 30-year-old visited a riding school near the London injury spinal cord centre in Stanmore on Wednesday night.

Only two days earlier, he was at the Godolphin Stable Staff Awards in Knightsbridge as special guest presenter. Champion Flat apprentice in 2009, he developed a close association with Sheikh Mohammed’s operation riding multiple winners for them on the Flat.

On a presenting panel which included ITV’s Ed Chamberlin and champion jump jockey Richard Johnson, Tylicki presented the most prestigious award of the evening, the Employee of the Year 2017.

“It was organised by the rehab centre and two physios came along. It was a milestone to see him back on a horse again. My mother and I were delighted and I’d say it was a really good experience for Freddy,” said Madeleine.

The horror fall happened back on October 31 when Tylicki’s mount Nellie Dean clipped heels and fell bringing down a further three horses in behind. At the time Tylicki and champion Flat jockey Jim Crowley were both rushed to St George’s Hospital in Tooting.

Only a month earlier he was riding his second Group 1 winner aboard the James Fanshawe-trained Speedy Boarding in the Prix de l’Opera at Chantilly.

He rode that filly to his very first Group 1 success back in August, that time in the Prix Jean Romanet at Deauville.

ITV Racing and At The Races presenter, Matt Chapman, who was a driving force behind a fundraising campaign which topped over £250,000 said on twitter: “The bravest of the brave. There’s no stopping @freddytylicki. Everyone in awe mate.” 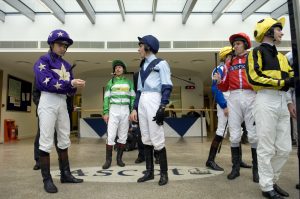 Up Next
BHA commits to mental health battle