Racing loses one of its finest amateur jockeys

Three years and four months on from suffering a horror fall at the Cheltenham Festival – former leading Irish amateur – John Thomas McNamara has died at his home in Limerick at the age of 41.

An hugely respected figure, McNamara was left paralysed from a crashing fall at the first fence when partnering the Jonjo O’Neill-trained Galaxy Rock, in the 2013 Fulke Walwyn Kim Muir Challenge Cup.

Scenes of the air ambulance rising amidst the packed Prestbury enclosures, preceded McNamara’s subsequent operation on fractures to the C3 and C4 vertebrae in his back at Bristol’s Fenchay hospital.

He returned home 15 months after that fateful day, the previous seven months spent in rehab at the North West Regional Spinal Injuries Centre on Merseyside.

McNamara’s paralysis left him requiring 24 hour care and confined to a high-tech wheelchair, while gradually being weaned off a ventilator.

Since that sadly memorable day, the support for McNamara has been unprecedented across the board including from closely-associated and leading owner, J.P. McManus.

In October 2013, it was unveiled at an event in Limerick that the racing community in Ireland had raised €800,000 for McNamara and the 18-year-old Jonjo Bright, who in a similar twist of fate was left in a wheelchair following a point-to-point fall in the very same month.

During his distinguished career as an amateur he rode over 600 winners, four of which came at the Cheltenham Festival.

The first of those came aboard Rith Dubh for messrs O’Neil and McManus in the 2002 edition of the Cross-Country Chase, a prize he was to pick up three years later on Spot Thedifference for County Limerick handler, Enda Bolger.

“He was one of those guys who only ever said three words but none would do. He was very unassuming and just a great person to have anything to do with,” reflected Bolger.

“He was an incredible horseman. I would say he was more of a horseman than a jockey.”

He even tasted success at the highest level aboard Like-A-Butterfly in the Champion Bumper at Leopardstown in 2001 for trainer Christy Roche.

The mare herself went on to win the Supreme Novices’ hurdle at Cheltenham the following year.

Ruby Walsh said: “He was as honest as the day is long. To deal with what he’s dealt with for the last three and half years just shows how mentally and physically strong he was.

“If the world had more people like John Thomas and Caroline it would be a hell of a better place.”

Champion jockey Richard Johnson also paid his tributes to McNamara on twitter earlier in the day.

“Very sad to hear about JT McNamara brilliant jockey and even better person. Thoughts are with his family #RIP,” said Johnson.

McNamara is survived by his wife Caroline, and children Dylan, Harry and Olivia. 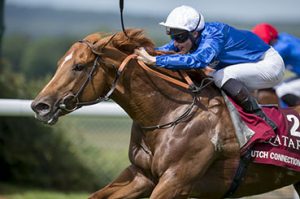 Up Next
Glorious start for McDonald and Hills