Glorious start for McDonald and Hills

With only a few days left until Sydney beckons – New Zealand born riding sensation James McDonald – was to steal the limelight once again this summer, for a trainer who played such a huge role when he first visited these shores back in 2013.

His riding and tactical ability was on full show aboard the four-year-old colt Dutch Connection, who triumphed in Glorious Goodwood’s feature on day one, the Group 2 Qatar Lennox Stakes.

The eight runners were taken along in the early stages by the Hugo Palmer-trained pair, Gifted Master and Home Of The Brave, at what visually looked a decent pace. The son of Dutch Art – who went off a nicely supported favourite – was settled in fourth and travelled strongly to close on the leaders turning for home.

McDonald switched his mount out with two furlongs to go and pushed the button well inside the final furlong. The duo quickly stretched clear in the run to the line, scoring by just under two lengths from the fellow Godolphin-owned, Home Of The Brave.

This year’s summer stint in the UK has been the 24-year-old’s best yet. A success in the Northumberland Plate at the end of June was followed by a win aboard the Michael Bell-trained Big Orange in the Princess of Wales’s Stakes at Newmarket earlier this month.

No doubt the victory will taste even sweeter given his association with the Hills family. They took him under their wing three years ago when he decided to make a summer switch from the southern hemisphere.

“He’s an awesome horse and I can’t believe I’ve won a big race for Charlie [Hills], he’s an absolute brother of mine,” reflected McDonald.

“Three years ago he put me up and has had so much faith in me, and the Hill’s team and I can’t thank them enough.”

With 43 wins on the scoreboard so far this year, the Weatherdown House team can savour their third Group win of the season, the first two coming with their talented sprinter Magical Memory who has tried valiantly to follow in the footsteps of retired stable-star, Muhaarar.

Hills said: “I don’t think he had won since Royal Ascot. He ran a good race in this last year but he had some good form going into this race.

“I always thought he had a favourites chance really.”

Earlier in the afternoon, Aidan O’Brien triumphed for a second time in the Group 2 Qatar Vintage Stakes courtesy of his two-year-old colt, War Decree.

The son of War Front was angled out from the inside with two furlongs to go, and came with a strong challenge down the centre of the track to win by a comfortable length and three quarters under Ryan Moore.

The festival opener saw the Mark Johnston-trained Fire Fighting, battle on in gritty fashion to claim the honours in the Matchbook sponsored handicap over 1m 2f.

The Alan Spence-owned five-year-old was one of four runners in the race for the Yorkshire maestro, who has traditionally coveted the midsummer meeting.

Adam Kirby got to work in the saddle from some way out, but he held off the late thrust of Oasis Fantasy by a neck. 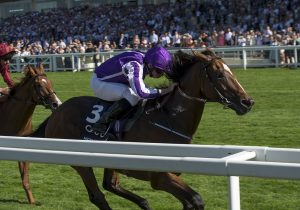 Up Next
Reel slips rivals under Moore masterclass