BHA: Italy should be kicked out
Stories

Expectation had built to a crescendo with the arrival of many major buyers from around the world in advance of the blue-blooded Paulyn Dispersal, with Irish Oaks winner Chicquita billed as its leading lady.

Sauntering into the ring last of the 24 Paul Makin-owned horses, the beautiful daughter of Montjeu did not disappoint the packed sales ring at Goffs, with bidding opened instantly by James McHale at €3 million. An extended tussle between McHale and father-and-son team Peter and Ross Doyle, saw the Classic heroine’s price tag soar to €6 million – a new record auction price for a thoroughbred sold at auction in Ireland, beating the Ir3.1 million gns paid for Shergar’s Irish St Leger winner Authaal in 1984.

“This ring hasn’t been this full since Christy Moore sat in the middle of it,” joked auctioneer Nick Nugent as the first of the Paulyn horses, Authorized’s brother Achtung, took his turn. Over two hours and 23 horses later, there was still just about standing room as Chicquita’s turn in the spotlight came. Her historic sale brought the tally for Makin’s bloodstock to €12,734,000.

Even without the Paulyn Dispersal, the first-day turnover at Goffs was up by 51%, with the total aggregate for the 177 sold on Friday amounting to €23,712,200, with an impressive clearance rate of 87%. Fifteen thoroughbreds sold for €250,000 or more during through the session, with two other Paulyn mares reaching the €1 million mark.

July Cup winner Fleeting Spirit, whose yearling and foal daughters by Galileo were also among the dispersal, was sold in foal to the champion sire, fetching €1.1 million from Japanese interests buying through Emmanuel de Seroux of Narvick International.

The well-bred Sadler’s Wells mare Song, originally bought for 1.7 million gns by Makin at Tattersalls in 2009, became the first mare to be offered in foal to Frankel in Europe, and she was bought by John Egan of Khalid Abdul Rahim’s Friarstown Stud for €1 million to stay in Ireland. 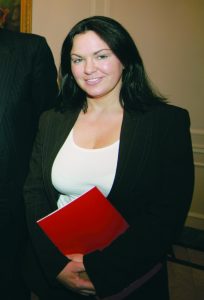 Up Next
BHA: Italy should be kicked out