Frankel given all clear
Stories

Haafhd has enjoyed a good year to date, with plenty of winners on the all-weather, a Grade 1 winner over hurdles and now two Listed victors.

Classic winner Haafhd is enjoying a good year at stud

The Peter Chapple-Hyam-trained three-year-old ran home impressively at Newmarket but does not hold an entry for the 2,000 Guineas in early May despite finishing runner-up to Fencing in the Washington Singer Stakes last August.

His black-type win follows that of the Shadwell-bred Junoob, who has been a winter flag-bearer for Tom Dascombe’s yard since being claimed in the middle of December. Since then, he’s won twice, including the Listed Winter Derby Trial, and was also runner-up in the Quebec Stakes. Junoob is entered to run in the Dubai Duty Free Finest Surprise Stakes (known as the John Porter Stakes) at Newbury on Saturday.

Haafhd’s success has not been restricted to the level, however, with the diminutive Countrywide Flame proving to be one of the very best juvenile hurdlers in the land. He won the Triumph Hurdle at the Cheltenham Festival and followed this up with a second-place finish to Grumeti in the Matalan Anniversary 4YO Hurdle at Aintree.

Counrtywide Flame was the second Cheltenham Festival winner for Haafhd after Carlito Brigante, who won last season’s Coral Cup and Grade 2 Juvenile Hurdle at Leopardstown, and the sire is also represented in the National Hunt division by the Grade 1-placed Shadow Catcher. 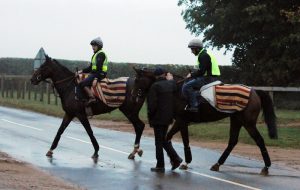 Up Next
Frankel given all clear