On what turned out to be an historic occasion at Prestbury Park, the feature race on the final day – the Grade 3 Greatwood Hurdle – went the way of the Skelton’s as North Hill Harvey held off all pursuers to land the £57,000 prize.

The 16 assembled runners were taken along by Sternrubin in the early stages. North Hill Harvey was positioned handily in fifth a few lengths ahead of the J.P. McManus duo, the unbeaten Winter Escape and Modus for last year’s winning trainer Paul Nicholls.

As the field fanned out coming to the second last, Harry Skelton looked to be travelling best under North Hill Harvey, the duo taking it up on the home turn.

Hotly chased by three rivals, he winged the last and found extra on the rail to repel Modus by half-a-length.

Team Skelton have been enjoying a fine start to the season and their record in two mile Graded handicap hurdles just keeps getting better. Superb Story, who finished runner-up in this race last year went on to win the County Hurdle at the Festival, while Ch’Tibello took the Scottish Champion Hurdle a month later.

“He’s a good horse I was glad to see the rain come for him,” reflected Harry. “I’m delighted for the owners they really are great people. It’s nice for us to have a nice novice like him and nice to see him go on, he’s a chaser in the making really.”

In the colours of Mrs Widdowson and Mrs Kelvin-Hughes, the five-year-old son of Kayf Tara tastes Graded success for the first time. He also registers a second victory at Cheltenham having taken a novices’ hurdle in December last year.

He’s a chaser in the making really

Earlier in the afternoon, the Nicholls-trained Le Prezien powered up the running to take a first win over fences in the Grade 2 Arkle Trophy Trial.

The five-year-old gelding was not fluent on occasions but when left in the lead two out from the departure of Some Plan, sailed over the last and forged clear to score by four lengths.

Colin Tizzard was to notch another winner at the November meeting, as newly acquired Fox Norton landed the Grade 2 Schloer Chase.

The son of Lando appearing in the familiar Potts silks for the first time, always travelled well under Aidan Coleman and came clear of Simply Ned on the running, putting him firmly in the Champion Chase picture. 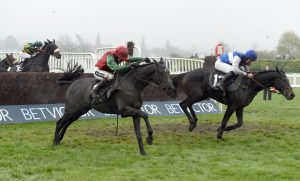 Up Next
O'Neill lands third Cup with Taquin