The nine-year-old continued his love affair with Prestbury Park

Taquin Du Seuil ended a dreaded lean spell for Jonjo O’Neill by providing him with a third success in a competitive renewal of the Grade 3 Bet Victor Gold Cup Chase.

The feature race on day two of Cheltenham’s November meeting has produced some sterling finishes in recent years, with Caid Du Berlais’ 2014 win a memorable finish. With the ground changing to soft, it did not disappoint.

As is his wont, Village Vic took up the lead under champion jockey Richard Johnson. The eventual winner Taquin Du Seuil was held up just worse of mid-division under Aidan Coleman, a few lengths behind his stable mate More Of That, the strongly fancied favourite.

With the field coming down the hill for the final time, the leader still travelled well pinching a few lengths. He was joined coming to the second last by Aso, but the latter scuppered his chance with a blunder.

Village Vic once again winged the last but Taquin Du Seuil who made stealthy progress from the rear, bridged the gap and got up in the final 50 yards to win by a neck.

For Coleman, this was very much a welcome tonic given that his last winner came towards the end of last month. That was when he steered Third Intention to a high-profile success in the Grade 2 Old Roan Chase at Aintree.

“It’s been a nightmare with injuries and everything but this is great and I could not be happier for Jonjo and his team,” reflected Coleman.

“It’s my first year there and they’ve been so good to me and welcoming, and to have a winner like this I promise you is special.”

The nine-year-old gelding’s record at Cheltenham now stands at three wins. The biggest of those trio came in the 2014 JLT Novices’ Chase at the Festival when partnered by Sir Tony McCoy to victory.

In the familiar Broughton and Friends silks, he made his seasonal debut over hurdles at Chepstow in the second week of October. He ran an encouraging race to finish a close sixth behind Ballyoptic.

O’Neill said: “The rain last night suited him. He just stays, loves this place and Aidan gave him a great ride.

“We were delighted with that run [at Chepstow] and the ground was probably on the quick side for him but he was coming home well. It’s nice to get a nice horse to win a nice race.”

Earlier in the afternoon, the Philip Hobbs-trained Defi Du Seuil notched an impressive second victory in this country when landing the Grade 2 Triumph Trial Juvenile Hurdle.

I could not be happier for Jonjo and his team

The three-year-old son of Voix Du Nord always travelled strongly under Barry Geraghty and was not extended in the run to the line beating Diable De Sivola by just under two lengths.

Last year’s World Hurdle hero Thistlecrack made his eagerly anticipated second start over fences in the novices’ chase on the card.

Despite a few heart-in-mouth moments including at the fifth – when he stood off a long way and dragged his hind legs through the fence – Tom Scudamore didn’t have to get serious with the eight-year-old. He cruised clear of his Gigginstown rival Marinero to win by four lengths. 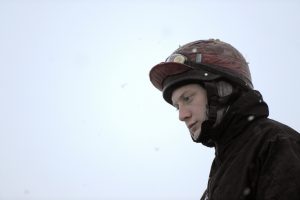 Up Next
Pauling happy with Greatwood three