Harbinger off the mark with first winner
Stories

Grade 1 race for mares at Cheltenham

The race programme for National Hunt mares has been given a significant boost with the news that the OLBG David Nicholson Mares’ Hurdle at the Cheltenham Festival has been upgraded to Grade 1 status.

Formerly a Grade 2 contest, which first appeared on the Festival programme in 2008, the race has been won six years in succession by the Willie Mullins-trained Quevega, who was retired at the end of last season.

The OLBG David Nicholson Mares’ Hurdle is one of four National Hunt races to have received a promotion from the BHA, along with The Hampton Novices’ Chase, The John Smith’s Scottish County Hurdle and The Hillhouse Quarry Handicap Steeple Chase, all three of which are now Listed races. Also receiving Listed status is a new race in the calendar, the Doncaster Mares’ Steeple Chase, which is to be run in December over 2m4f.

Twenty-three black-type opportunities for National Hunt mares now exist in the British jumps racing programme thanks to the combined efforts of the BHA and TBA to promote ownership of mares in training.

Ruth Quinn, the BHA’s Director of Racing, said: “We are extremely pleased to be able to upgrade the OLBG Mares’ Hurdle to Grade 1 status as it is a race which has performed consistently in the seven years since its inception. This is partially thanks to the presence of Quevega but also because the race has consistently produced large and high-class fields.

“The work of Quevega and the upgrading to Grade 1 status mean that the Festival now boasts a truly aspirational and important mares-only race so soon after the concept was introduced to the Festival programme. This, alongside the wider work to upgrade the mares’ programme, provides a real incentive to buy and keep top class hurdling Mares in training which is important for the horse population as a whole.”

Simon Claisse, Clerk of the Course at Cheltenham added his support, saying: “I am firstly delighted that the OLBG Mares’ Hurdle, registered as the David Nicholson, has been promoted to Grade 1 status. Quevega has made the race her own over the last six years, but since its inception in 2008, it has gone from strength to strength.

“Cheltenham Racecourse is committed to supporting mares-only races with six Pattern and Listed races throughout our season and for the championship race at The Festival to be promoted to Grade 1 shows the strength and depth in this area of the sport.” 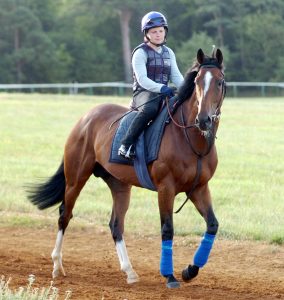 Up Next
Harbinger off the mark with first winner