Bracelet sparkles at the Curragh
Stories

Harbinger off the mark with first winner

Harbinger, who signed off his racing career in flamboyant fashion with an 11-length victory over Cape Blanco in the 2012 King George VI and Queen Elizabeth Stakes, recorded his first winner as a sire in Japan on Sunday when Suave George won over 1800m at Hakodate.

Harbinger during his days in Newmarket, leading his fellow Japanese-based sire, Workforce

Now standing in Japan at Shadai Farm, Harbinger, a son of Dansili out of the Bering mare Penang Pearl, won six of his nine starts for Sir Michael Stoute and Highclere Thoroughbred Racing, including Royal Ascot’s Hardwicke Stakes in record time.

Standing for a fee of ¥3,500,000 (approximately £20,000), Harbinger has proved popular with Japanese breeders and covered in excess of 200 mares in each of his first two seasons at stud.

He has had nine runners to date in Japan and has had three placed horses along with the Northern Racing-bred winning colt Suave George. 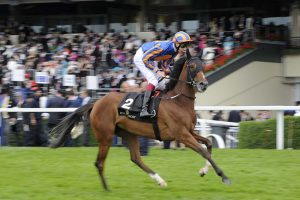 Up Next
Bracelet sparkles at the Curragh