Gordon Elliott has been handed a 12-month disqualification – with six months suspended – after the release of a photograph that showed the trainer sitting on a dead horse, subsequently named as Gigginstown House Stud’s Morgan, on his gallops while making a phone call. He was also fined €15,000.

On Friday the Irish Horseracing Regulatory Board’s Referrals Committee met at Naas racecourse to hear the case, deciding that Elliott had brought the sport into disrepute and was in breach of Rule 272(i), which relates to the proper conduct and good reputation of horseracing.

Elliott’s ban starts on March 9 and while eight horses owned by Cheveley Park Stud, including unbeaten chaser Envoi Allen, have already been sent to other yards, the trainer’s Cullentra House Stables could still be represented at the Cheltenham Festival and Aintree if another licensed trainer is installed in his place.

Denis Egan, Chief Executive Officer of the IHRB, said: “Where breaches of rules occur and where participants in racing act in a manner that brings the sport into disrepute, there are no winners, and in fact, the loss is to Irish racing with damage to the reputation of the sport.

“Having acted with thoroughness and having followed due process at all times, the IHRB team are satisfied that the case has been dealt with fairly and appropriately.

“We recognise the heartfelt upset that this matter has caused to people inside and outside of racing, none more so than to the staff employed by Mr Elliott.

“We also see at first hand both on the racecourse and as part of our stable inspection programme that horses receive unrivalled care, attention, and affection. Indeed, as part of the investigation into this very case, an unannounced stable inspection of Mr Elliott’s yard this week led to no concerns about the welfare of the horses in his care, as has been the case during any other inspection we carried out at his premises each year. In our opinion the incident covered in today’s hearing is not reflective of Irish racing.”

A statement from the British Horseracing Authority, which imposed an interim ban on Elliott-trained runners in the UK pending the outcome of the IHRB investigation, read: “We welcome the fact that the Irish authorities have acted swiftly. The suspension will be reciprocated here in Great Britain.

“The existing restriction on Mr Elliott having runners in Great Britain will stay in place until the suspension takes effect on March 9.

“The IHRB Referrals Committee pointed to the fact that the photo showed appalling bad taste and demonstrates a complete absence of respect for the horse. We endorse these comments, and the view that respect is an integral and essential part of the duty of those in charge of animals.

“Today’s decision confirms that horses will not be able to run at the Cheltenham Festival or Grand National Festival in the name of Gordon Elliott.

“However, if horses are transferred directly to other licensed trainers prior to March 9 – when the suspension is due to commence – they will be able to run.” 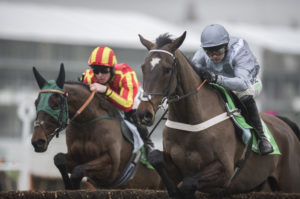