All the way win for Josses Hill
Stories

Yorkshire-born James Reveley is set to become the first British rider to secure the French jockeys’ title in almost 100 years.

The golden whip has been firmly within his grasp since mid-August when his nearest rival David Cottin broke three vertebrae from a fall in a cross-county chase at Lignieres.

That day the three-time champion was partnering none other than the former Nicky Henderson-trained Grandouet. The Grade 1-winning hurdler, still in the colours of Simon Munir, had only just joined Cottin’s father, Francois, in an attempt to reignite some spark.

Reveley said: “I was shocked to hear about David’s fall and how serious it was. I’ve known him ever since I first started coming to France as he’s only a year younger than me so we started out at pretty much the same time.”

He continued: “We get on well and take the micky out of each other a lot! I went to see him a couple of weeks after his fall and we keep in touch.”

With Cottin out of the picture, Reveley developed a healthy lead over his remaining opponents headed by Thomas Beaurain over 30 winners behind.

Injury then struck the 27-year-old, just a week after notching his second Grade 1 win of the campaign aboard De Bon Coeur in the Prix Cambaceres on November 6.

The fall, which resulted in a broken ankle, came from the Guillaume Macaire-trained Device in the Prix Renaud du Vivier at Auteuil.

Contesting the £89,000 first prize were four British and Irish challengers, including the Willie Mullins-trained Footpad, who went on to finish a close second.

The four-year-old looked likely to give Reveley his 85th success of the year when hitting the front before two out. However, that second last flight was to claim them both and cut short the riders mean winning streak.

Unless miracles come true, Reveley will be making history come December 31 and says that he will feel very proud and satisfied with his achievement.

He added: “This has without doubt been my best season and really a year to remember. At the end of 2015 I had to make a very difficult – although on the face of it quite obvious decision – to leave England and come over to France full time.

“It meant leaving dad (trainer Keith Reveley) without a jockey, which was very hard as he’s been the biggest influence on my career.”

Reveley has not ridden in Britain since mid-April but has not completely given up on riding in Britain once his ankle is fixed. 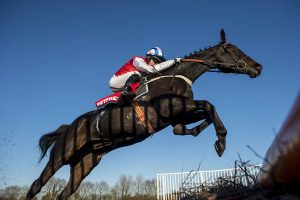 Up Next
All the way win for Josses Hill