Gold Cup glory for A Plus Tard and Rachael Blackmore

A beautifully judged ride by Rachael Blackmore saw A Plus Tard reverse form with stable companion Minella Indo from a year ago to take the Grade 1 Boodles Cheltenham Gold Cup (3m2f) in emphatic fashion.

Asterion Forlonge and Aye Right led the 11-runner Gold Cup field in the early stages, closely followed by Santini and Royal Pagaille, with A Plus Tard settled towards the rear by Blackmore, riding an ice-cool race in her bid to go one better than 2021.

Chantry House never got into a rhythm under Nico de Boinville and was pulled up before the race got serious while King George victor Tornado Flyer was also pulled up, yet there were still a host of chances as the runners raced down the hill for the final time.

Minella Indo under Robbie Power made his bid for glory after turning for home and was still ahead jumping two out but in his wing mirrors A Plus Tard was being produced by Blackmore with an irresistible challenge.

There wasn’t much between the duo jumping the final fence but A Plus Tard landed full of running and simply powered away from his tiring stablemate to record a sensational 15-length triumph over Minella Indo, two and half lengths clear of Protektorat, who just edged out Galvin for third. 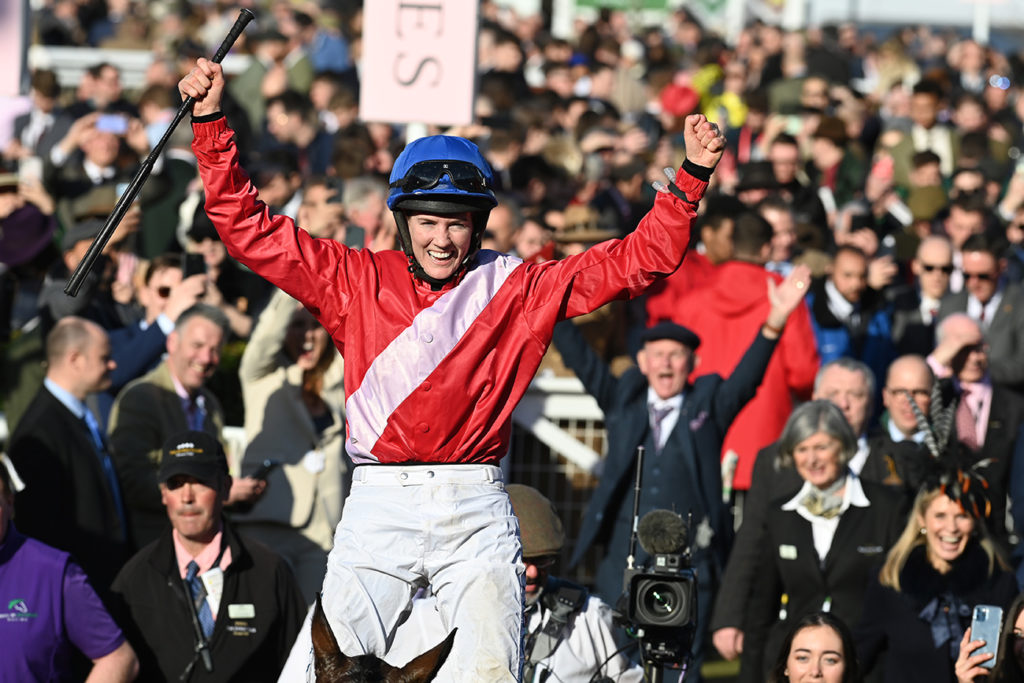 Blackmore said: “I can’t believe it. I’m so lucky to be getting to ride all these good horses. Being attached to Henry’s yard is absolutely phenomenal!

“I never even dreamt I could be doing this. It wasn’t in my reality – but you can never dream too big.”

Richard Thompson of Cheveley Park Stud, whose later father David made the decision to start buying top-class jumps prospects, said: “This takes the biscuit. It’s a dream. He was class in the Betfair Chase and he’s done the same today. This is right up there and at the moment it’s number one! It will never leave my memory.”

There was a 1-2-3 for Irish-trained runners in the opening Grade 1 JCB Triumph Hurdle (2m) as the Willie Mullins-trained Vauban justified his big reputation with a decisive success in the famous silks of Rich Ricci.

Sent off a hot 6-4 favourite, Vauban was settled in midfield by Paul Townend as Porticello and Fil Dor set the fractions up front, moving up stylishly into contention on the run to the last flight as Townend brought the Galiway gelding towards the rail.

Despite getting in too tight to the final hurdle, Vauban quickly recovered his composure and stayed on too strongly for Gordon Elliott’s duo Fil Dor and Pied Piper, scoring by two and a half lengths. 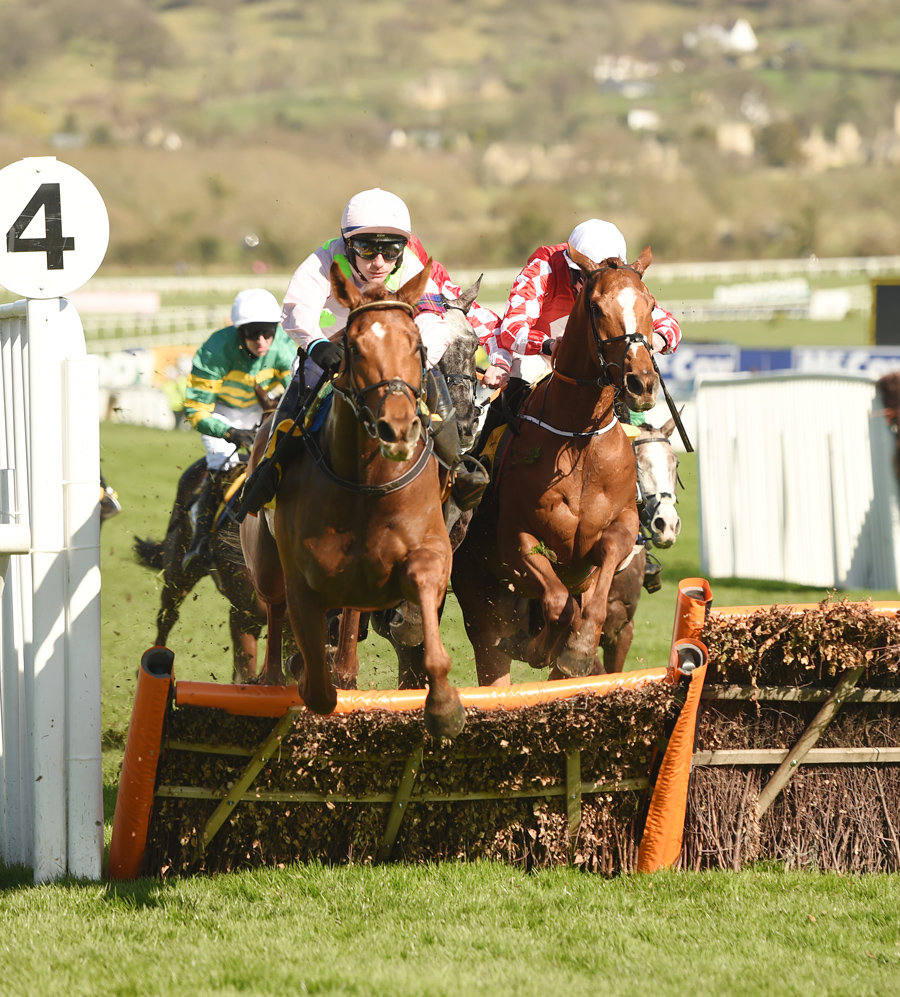 Ricci said after the race: “He flattened the last but when Paul asked him to go, he had so much pace. He’s a proper little taxi.

“We bought him as a dual-purpose campaigner. I wouldn’t mind running him on the Flat. The [2023] Champion Hurdle has to be in our plans. He’s lightly raced and was a Listed winner on the Flat.”

Willie Mullins’ stable didn’t have to wait long for a second winner on the day thanks to tremendously exciting five-year-old State Man, owned by Joe and Marie Donnelly.

The Doctor Dino had only run three times prior to the Grade 3 McCoy Contractors County Hurdle (2m179y) but the market suggested he was a class act and the favourite didn’t disappoint, travelling ever so sweetly in the hands of Paul Townend and recording a ready victory over the fast-finishing first Street.

The Mullins machine made it three in a row courtesy of The Nice Guy, emphatic winner of the Albert Bartlett Novices’ Hurdle (3m) under Sean O’Keeffe, who was partnering his first Grade 1 winner.

Racing in the familiar colours of owner Malcom Denmark, The Nice Guy was settled off the pace in a strongly run affair as favourite Hillcrest failed to show his true form, pulling up on the second circuit, while the strongly fancied Ginto sadly went wrong after turning for home when looking to hold every chance.

Coming down to the final flight the race was between stables companions Minella Cocooner and The Nice Guy but the latter was travelling much the better and after jumping to the lead, galloped on willingly up the famous hill to take the prize by five lengths, preserving his unbeaten record, which now stands at four races. 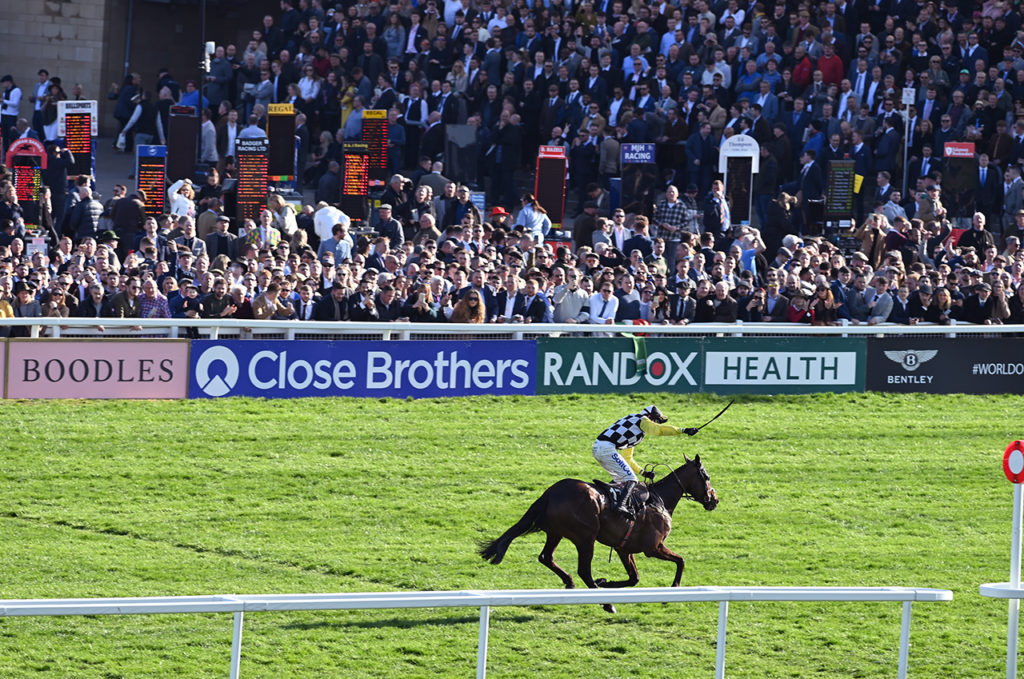 Denmark said: “It’s been 22 years [since Monsignor won the Royal & SunAlliance Novices’ Hurdle]. There’s so many knocks and disappointments, nice horses that have not gone on. He’s done nothing but improve. His name portrays him.”

His son Callum said: “It’s what we’ve been dreaming of. There’s nowhere like Cheltenham. It’s unreal.”

It was a never-say-die effort from Patrick Mullins in the saddle, as Winged Leader had a huge advantage jumping the final fence, but as his stamina started to run dry, Billaway was staying on strongly under Mullins and edged ahead near the line, taking the spoils by a hard-fought neck.

Nine winners for Mullins quickly became ten – and five on the afternoon – when JP McManus’s Elimay and Mark Walsh prevailed in a tight finish from outsiders Pink Legend and Scarlet And Dove in the Grade 2 Mrs Paddy Power Mares’ Chase (2m4½f).

The closing race of the Cheltenham Festival 2022, the Martin Pipe Conditional Jockeys’ Handicap Hurdle (2m4½f), fell to the Joseph O’Brien-trained Banbridge under M McDonagh, providing owner Ronnie Bartlett with a second winner of the week after Stattler’s strike in the National Hunt Chase. 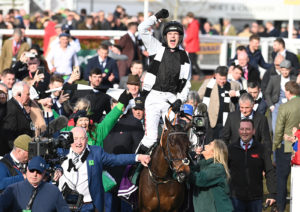 Up Next
Flooring Porter brilliant in Stayers' victory