Flooring Porter retained his Stayers’ Hurdle in brilliant fashion on Thursday, bossing the race throughout to win in authoritative style.

With the meeting staged back in front of a full crowd, plenty of the pre-race focus centred on how the exuberant Flooring Porter would cope with the preliminaries. But any fears of him boiling over proved unfounded and having settled well in front for Danny Mullins, he was in a fine place to be able to dictate the right fractions throughout.

Mullins had the field stacked up behind him coming down the hill yet he also had plenty of horse still running for him. A fine leap at the last sealed the advantage and from then on, the result was never in doubt with the Gavin Cromwell-trained gelding ultimately crossing the line two-and-three-quarters of a length to the good of Thyme Hill. The popular Paisley Park also made good headway from the rear to finish a nose away in third.

“I never saw the others but I could hear them,” said Mullins. “Everything went to plan. Big credit has to go to Gavin – I love the horse but he’s quirky. Gavin’s training is the reason we’re back here again today. He’s done a fantastic job with this lad all year.”

He added: “I wasn’t too worried about the preliminaries. The more he gets into the season, the less gas there is in his system. Gavin brought him over a couple of days early and he was a little bubbly early on. But we were very happy with him this morning – he was relaxed but showing a spark again. We believed in him.”

Celebrating in front of a rapturous crowd, Gavin Cromwell told ITV Racing: “How good is that? He jumped off, made the running as we hoped and from then on it was easy really.”

Flooring Porter, a son of Coolmore’s Yeats, was bred in Ireland by Sean Murphy. He is the second foal out of his winning dam Lillymile, a daughter of Revoque. 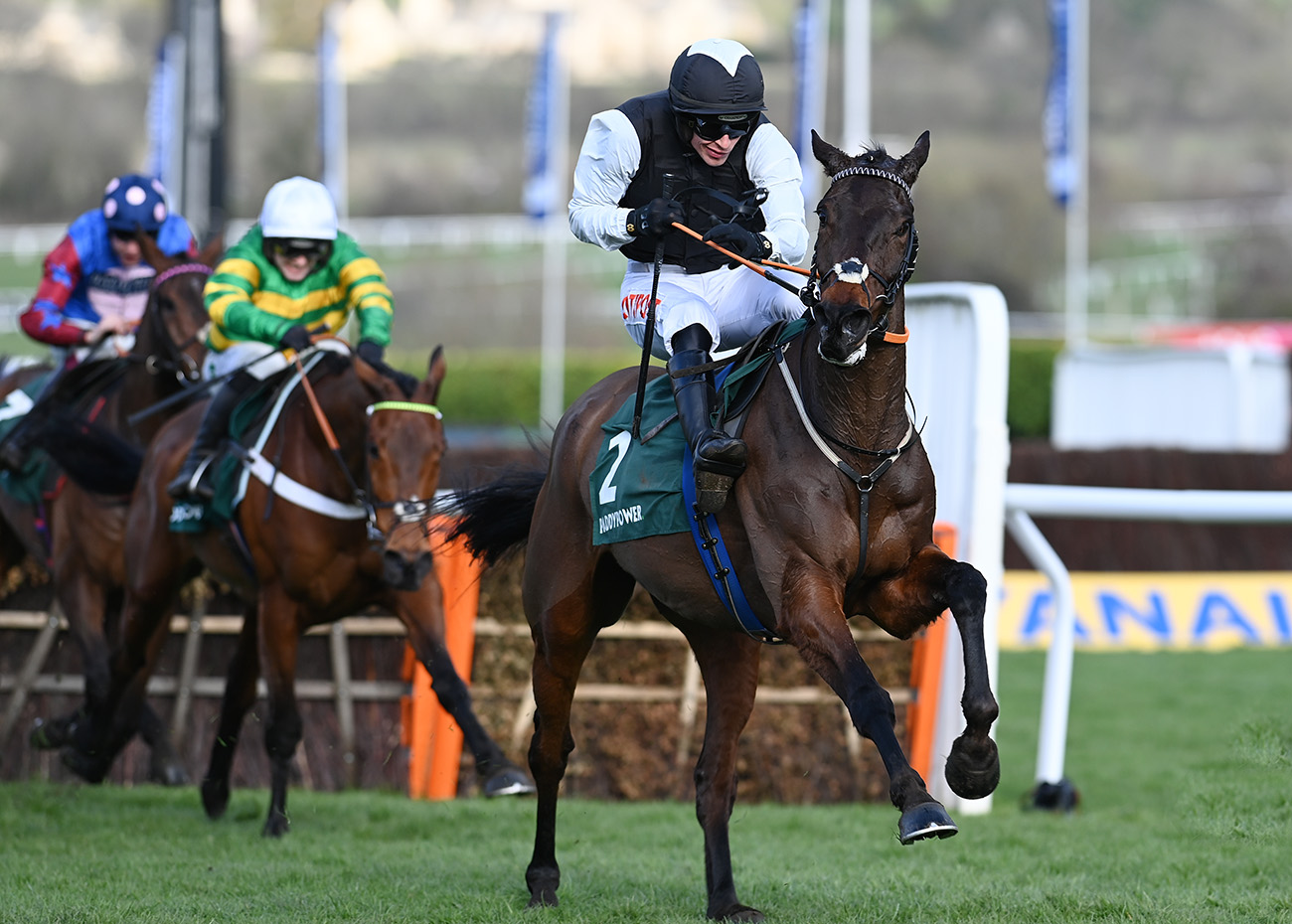 On a day that belonged to reigning champions, odds-on favourite Allaho ran them ragged in the Ryanair Chase to become the first back-to-back winner of the race since Albertas Run in 2011.

Much like last year, the Cheveley Park Stud colour-bearer went hard from the front and having built up a good advantage turning into the straight, was never challenged to score by 14 lengths. In the process, he turned in an exemplary round of jumping bar a sketchy leap at the last with the race in safe keeping.

“He gallops and jumps,” said his relieved partner Paul Townend. “He’s just really good. We got into a lovely rhythm again and he’s very straightforward.

“We’ve taken our time learning about him but I think we’ve got there now. I’m delighted.”

Allaho was partnered to victory by Rachael Blackmore last year and trainer Willie Mullins was quick to pay tribute to the ride given this time around by Townend.

“There was a lot of pressure on Paul after Rachael put up such an exhibition of jumping on him last year,” said Mullins. “So full marks to Paul, I thought he gave him a great ride. And the horse was fantastic.”

Now the winner of seven races, Allaho is a son of the ascendant French stallion No Risk At All, one of the most popular jumps sires in Europe, and a half-brother to the Listed-placed hurdler Shanning. They were bred in France by Eric Leffray out of the Turgeon mare Idaho Falls. 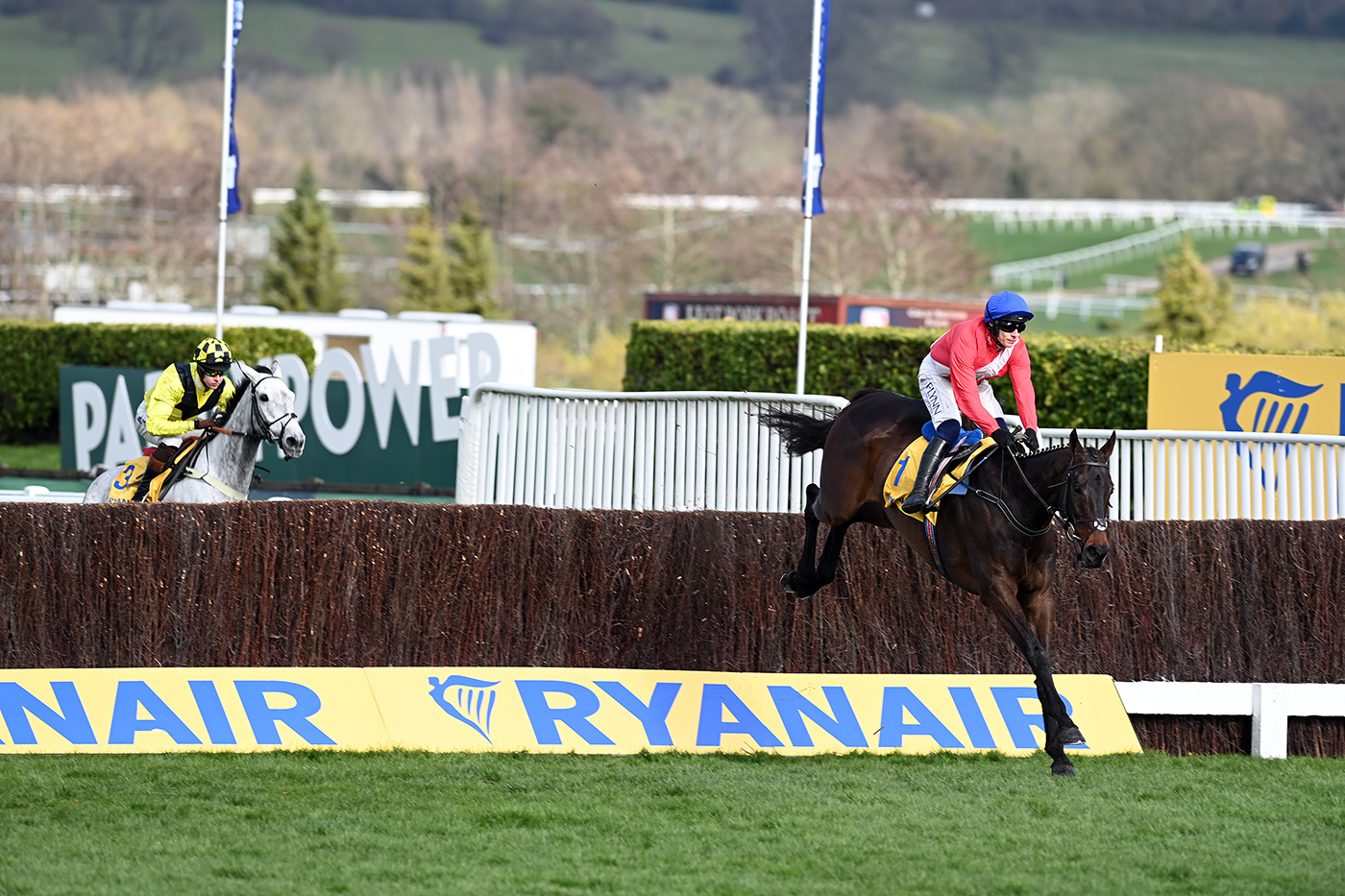 Jumping is the name of the game and for Galopin Des Champs, it was a final fence error that stood between him and victory in the Turners Novices’ Chase.

The Willie Mullins-trained gelding had looked a superstar in the making before then, with an exuberant round of jumping putting distance between himself and Bob Olinger as the pair raised the tempo from the top of the hill. Asked to quicken round the home bend by Paul Townend, Galopin Des Champs flew the penultimate fence and hit the last spot on, only to knuckle over and throw his jockey overboard upon landing.

That left the Robcour-owned Bob Olinger, who looked well beaten at the time, in front under Rachael Blackmore and the pair duly went on to score by 40 lengths from 50/1 shot Busselton in the four-runner event.

“It’s great to see Galopin Des Champs and Paul up and ok,” said Blackmore. “It was their race to win.

“I didn’t get into a good a rhythm as wanted to and I thought my fate was my fate turning in but that’s jumps racing. I’m delighted we won.”

“We all want to win but not like that,” said the trainer. “We looked well beaten. I was surprised to see him off the bridle as early as he was. I thought he jumped reasonably well – he got into one at the top of the hill and he just put down at that but then he came back on the bridle. Interestingly, Rachael said she wasn’t happy with him so we will get him looked into as well.”

Bob Olinger was bred by Kenneth Parkhill out of the winning Zaffaran mare Zenaide. He shares his sire, Glenview Stud’s Sholokhov, with another chasing star of this season, Shishkin. 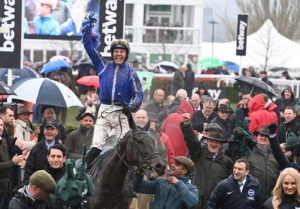