AP McCoy to retire at end of the season
Stories

Newmarket has unveiled details of a £2 million-plus Dubai Future Champions meeting this October, the centrepieces of which will be the Fillies’ Mile on the Friday (October 9) and Dewhurst on the Saturday.

It had already been announced that the Middle Park and Dewhurst, much to the delight of horsemen, would again be run on different days. Connections now have the option of running a juvenile in both, which was possible before controversial changes to the Pattern came in with the creation of Champions’ Day at Ascot in 2010.

The upping of the distance of the Prix Jean-Luc Lagardere, to a mile from seven furlongs, paved the way for the seven-furlong Dewhurst to be moved. This year the Dewhurst had been held 24 hours before Ascot’s big day, as part of Future Champions’ Day, but it was widely felt that Britain’s Champions Weekend had proved a dud.

Racehorse Owners Association President Rachel Hood said: “Racehorse owners will be delighted with this exciting development and we are particularly grateful to Dubai for their valuable input and investment.

“Newmarket is to be commended on the work they have put into creating this autumn programme. The prize-money fund for the Dubai Future Champions Festival is most welcome and the Rowley Mile deserves to be supported by owners and trainers.”

As well as revealing plans for its new two-day October meeting, Newmarket also stated it was open to the idea of moving the July meeting back to a midweek slot in 2016, so that the July Cup is again no longer staged on a Saturday that already contains York’s John Smith’s Cup card, along with valuable fixtures at Ascot and Chester. 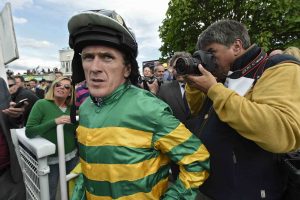 Up Next
AP McCoy to retire at end of the season