AP McCoy to retire at end of the season

A dramatic running of Newbury’s Grade 2 Game Spirit Chase led to an even more dramatic announcement in its aftermath when 19-time champion jump jockey AP McCoy announced that he will retire at the end of the season.

His victory on the Paul Nicholls-trained Mr Mole brought up McCoy’s 200th winner of the season – the tenth time he has achieved this extraordinary feat.

Interviewed live on Channel 4 as he was being led in to the winner’s enclosure, he was congratulated on this achievement by presented Rishi Persad and replied: “I have to tell you that it will also be the last time I ride 200 winners in a season. I’ve discussed it with JP [McManus] and my agent Dave Roberts and I’m going to be retiring at the end of the season – there’s a bit of news for you.

“I want to go out while I still enjoy riding and while I’m still relatively at the top. JP and Dave are the only people I spoke to – [wife] Chanelle didn’t even know about it until I got Dave down to have a chat on Monday. My mum and dad didn’t even know – they are going to find out about it on television but I think they’ll be pleased.”

In November 2013, McCoy made history at Towcester when becoming the first jumps jockey to surpass the 4,000-winner mark and he was named BBC Sport Personality of the Year in 2010.

Paying tribute to McCoy after the race, champion trainer Nicholls said: “He’s been brilliant to have anything to do with. He’s been a great ambassador. It doesn’t surprise me totally, I guess he had to retire sometime and he’s obviously taken this decision now but everyone will miss him, won’t they?”

Fellow jockey Richard Johnson, so many times runner-up to McCoy in the championship, said: “We’ve all got to get to that point one day but it will be a great sadness to lose him from the weighing-room. He’ll make his presence felt for the next few months, that’s for sure. He’s been amazing and for 20 years he has dominated our sport so it’s a shock today and it will be a shock when we get to the end of the season.”

The race had attracted plenty of attention for marking the comeback from injury of Queen Mother Champion Chase winner Sire De Grugy. Gary Moore’s charge posted in a few minor jumping mistakes before unshipping jockey Jamie Moore at the third-last fence with when he met the fence wrong and blundered his way through. He galloped loose alongside Uxizandre for two fences before Uxizandre too made a mistake which saw Barry Geraghty unseated at the last.

Having run home clear by 13 lengths, the JP McManus-owned Mr Mole will now be aimed to challenge for Sire De Grugy’s crown in the Queen Mother Champion Chase at the Cheltenham Festival. 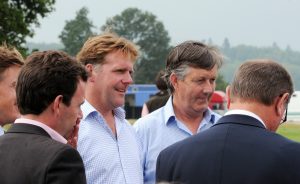