Force to be reckoned with
Stories

Andre Fabre landed his eighth victory in the Group 1 Grand Prix de Paris with Juddmonte’s Flintshire, who was eased down to win after storming to an impressive lead over runner-up Manndawi and stable-mate Ocovango.

Maxime Guyon started celebrating before his mount had even crossed the line to record his third success from just four starts, including the Group 3 Prix du Lys last month.

Fabre won the Grand Prix de Paris four years in succession from 1996 to 1999, with Grape Tree Road, Peintre Celebre, Limpid and Slickly. Peintre Celebre went on to success in the Prix de l’Arc de Triomphe, as did the trainer’s 2006 winner, Rail Link, who, like Flintshire, is a Juddmonte homebred son of Dansili.

Fabre also landed the Grand Prix de Paris, now considered by many to be the real French Derby since the shortening of the Prix du Jockey-Club in 2005, with Cavalryman in 2009 and Meandre in 2011.

Flintshire, now joint-favourite with Al Kazeem for the Arc on October 6, is out of the French Group 2 winner Dance Routine (by Sadler’s Wells), a grand-daughter of one of Prince Khalid Abdullah’s foundation mares Bourbon Girl. It’s a cross which has worked well for Dansili, whose Group winners The Fugue, Passage Of Time, Testosterone, Father Time, and the ill-fated Thomas Chippendale are all out of Sadler’s Wells mares. 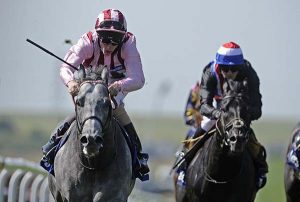 Up Next
Force to be reckoned with