Force to be reckoned with

Lethal Force trounced some of the biggest names in the sprint division when rocketing to success in the Darley July Cup in a new track record to land his second consecutive win at the highest level.

The grey son of Dark Angel was in command from the outset, jumping smartly from stall four and taking up the lead on the stands’ rail. His potent performance left Society Rock once again trailing in his wake, this time getting half a length closer to him than the two-length deficit recorded when the pair last met in the Diamond Jubilee Stakes at Royal Ascot.

“I am so proud of him because he has always promised,” said trainer Clive Cox, who bought Lethal Force as a yearling for owner Alan Craddock for just €8,500. His second victory in a valuable Global Sprint Challenge race has taken his earnings to £681,519.

Lethal Force has received an invitation to take part in the A$1million Patinack Farm Classic in Australia in November – success in which would see him land a A$600,000 bonus – but in the short term he is likely to be seen next in the Prix Maurice de Gheest at Deauville next month.

Cox added: “There are lots of nice options and beyond that we’ve had kind invitations from Australia and Hong Kong but we will take it one step at a time. He wouldn’t be a soft-ground horse though and the only time we disappointed him was when we ran him on soft ground at Longchamp last year.

“Even when he won at Royal Ascot they kind of said he was lucky and that it was a good ride, but he confirmed that he is pretty good. He has done that nicely.

“My only concern was the track – the undulations – as he was a little bit inclined to get unbalanced in his earlier days. But he has put that to bed really well. The course record is something I will cherish.”

The only sour note on an otherwise red-letter day for Lethal Force’s jockey Adam Kirby, who also rode Field Of Dream to victory in the Bunbury Cup, was that he received a four-day ban for each of his winning rides for using his whip with excessive frequency. 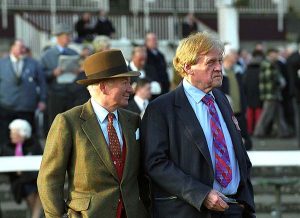 Up Next
Owner-breeder Guy Reed dies at 91