The freshman sire ranks lost a highly promising member on Saturday when Shadwell Stud’s Aqlaam died suddenly after failing to respond to veterinary treatment for an infection in his guttural pouch.

The eight-year-old son of Oasis Dream had made a good start to his stud career with his first juveniles this season, his six winners from just 15 starters giving him a 40% winners-to-runners strike-rate. They include Shadwell homebred Mitraad, the impressive winner of a Newmarket maiden on his debut on September 27, and the 85-rated Aqlaam Vision.

Announcing the news on Saturday morning, Shadwell Stud Director Richard Lancaster said: “This is an enormous blow to everyone involved with Aqlaam as it has come just as he was establishing himself as an exciting young stallion.”

Bred by Granham Farm from the Rainbow Quest mare Bourbonella, Aqlaam was bought by Sheikh Hamdan as a foal for 260,000gns at Tattersalls in 2005 and later sent into training with William Haggas. He broke his maiden on his first start at three and went on to win the Jersey Stakes at Royal Ascot before proving to be one of the best milers of his generation with victories in the Group 1 Prix du Moulin and Group 2 Summer Mile as a four-year-old. His three-year-old sister Araqella won on debut for Haggas this season.

Aqlaam has three yearlings catalogued to sell during Book 1 of Tattersalls’ October Sale, which starts on Tuesday, and a further 16 catalogued for Book 2 the following week. 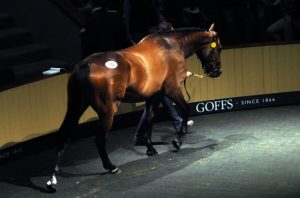 Up Next
Orby Sale dazzles with €2.85m colt