Botti is the Biz
Stories

The staying test of the Belmont Stakes may mean it sometimes lacks some of the allure of the first two legs of the Triple Crown but with Palace Malice leading home the winner of the Preakness Stakes, Oxbow, by three and a quarter lengths followed by Kentucky Derby hero Orb, the 2013 renewal certainly didn’t want for star quality.

Palace Malice’s victory for trainer Todd Pletcher and owner Dogwood Stables also provided a Classic winner from his very first crop for Curlin, himself a winner of the Preakness amid his seven Grade 1 successes. The son of Smart Strike, who was unraced at two, was also third in the Kentucky Derby and beaten just a head by Rags To Riches in the Belmont.

Palace Malice was bred by Will Farish, who owns Lane’s End Farm where former dual Horse of the Year Curlin stands, and he is the third foal out of the Royal Anthem mare Palace Rumor, herself a winner over an extended mile. Having been sold as a yearling for just $25,000 at Keeneland’s September Sale, Palace Malice returned to the same venue a little over six months later where he was knocked down to Dogwood Stable for $200,000 at the Two-Year-Olds In Training Sale.

The colt, who finished twelfth in the Kentucky Derby having been runner-up in the Grade 1 Blue Grass Stakes in April, heads the list of Curlin’s performers to date, which include the Listed-winning fillies Countess Curlin and Stopshoppingdebbie. The statuesque chestnut stallion has also been represented by the Grade stakes-placed Liberated and Blue Violet, while in Britain, the Lanwades Stud-bred Savanna La Mar finished runner-up in last season’s Listed Star Stakes at Sandown for Kirsten Rausing. 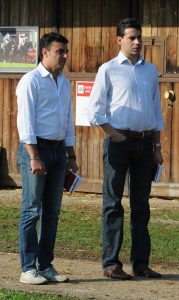 Up Next
Botti is the Biz