Horse of the Year-elect Fiorente, famously successful in the Melbourne Cup last November, brought the curtain down on the Melbourne Autumn Carnival with a splendid victory in the Darley Australian Cup at Flemington on Saturday. Even this magnificent performance, though, was arguably overshadowed by a remarkable family double when the Schofields – father Glyn and son Chad – landed a quickfire Group 1 double within half an hour, Glyn riding Boban to win the Chipping Norton Stakes at Warwick Farm in Sydney shortly after son Chad had partnered Lankan Rupee to victory in the Lexus Newmarket Handicap at Flemington.

Glyn Schofield was one of the leading jockeys in South Africa until emigrating to Australia with his family around a decade ago. Since then, he has established himself as one of the leading jockeys in Sydney, becoming the regular rider of some excellent horses including the top sprinter Hay List, who won the Newmarket Handicap in 2012 on one of the seemingly rare occasions when he wasn’t running second behind Black Caviar.

Chad Schofield too has flourished since the family decided to call Australia home. In the past decade, he has left school, served a successful apprenticeship with David Hayes, etched his name into the history books by riding Shamus Award to victory in this season’s Cox Plate – and now, most recently, followed in his father’s footsteps by riding a Newmarket Handicap winner. Like the jockey, the horse is bred for the job: Lankan Rupee, a four-year-old gelding whom Caulfield-based trainer Mick Price had sent out to win the Group 1 Oakleigh Plate two weeks previously, races in the colours made famous by Redoute’s Choice and is a son of that former top sprinter and current top sire.

Chad Schofield nearly made it two Group 1 victories for the day when he partnered last season’s Emirates Melbourne Cup winner Green Moon into second place behind Fiorente in the Darley Australian Cup, a 2000m championship event which can be viewed as Australia’s premier weight-for-age race. This represented a great result for the Melbourne Cup as it is a good boost for the race’s status that the past two winners can show themselves to be top-class under weight-for-age, as well as handicap, conditions.

It is also a good result for the ongoing trade in European exports to Australia, with the first three horses home in the Darley Australian Cup (third place being taken by the GB-bred former Juddmonte gelding Foreteller) having started life in the Europe – as did the first two home in the Group 2 Blamey Stakes on the same card, in which the former Jean-Claude Rouget-trained Lidari (an Aga Khan-bred son of Acclamation) led home the ex Aidan O’Brien inmate Foundry, an Irish-bred son of Galileo.

Sadly, Darley Australian Cup Day ended in gloom when news broke of the death of Roy Higgins at the age of 75.

Champion jockey in Melbourne a record 11 times between 1964 and 1978, Roy Henry Higgins MBE (nicknamed ‘The Professor’, a tag inspired by Professor Henry Higgins in ‘My Fair Lady’ and founded on the thoroughness of his preparation and his tactical acumen) was an icon of Australian racing, having spent 20 years as a dominant jockey and a subsequent 30-year period as a living legend who was always there to help the sport and its participants.

Roy Higgins rode in an era in which the best Australian jockeys generally spent large parts of their carers riding in Europe. He was an exception (although he did spend two – surprisingly unsuccessful – summers in France in 1963 and ’64, where his few winners included a victory at Chantilly on Grey Lag, owned by Sir Peter O’Sullevan and trained by his owner’s good friend Rae Johnstone) and this means that his international profile was lower than that of some of his less gifted peers. However, the success of his riding career cannot be overstated, most notably in the light of his 17-year association with Bart Cummings, with whom he combined to win two Melbourne Cups (with Light Fingers in 1965 and Red Handed in 1967) and two Golden Slippers (with Storm Queen in 1966 and Tontonan in 1973). Other champions whom he rode for Cummings included Century, Taj Rossi, Leilani, Galilee, Big Filou, Lowland, Fulmen, Dayana, Cap D’Antibes, Lord Dudley and Leica Lover.

Higgins also rode nearly all the other great Australian horses of that era including the Tommy Smith-trained legends Tulloch (whom he rode in trackwork every day for a month and then in a trial at Pakenham when a young jockey just out of his apprenticeship), Kingston Town and Gunsynd (whom he partnered to victory in the 1972 Cox Plate). He was also the stand-in jockey for Australia’s two sprinting legends of the ‘60s, ‘70s and ‘80s (Vain and Manikato) when their regular jockeys Pat Hyland and Gary Willetts were unavailable: he rode Vain at Moonee Valley on the only occasion that Hyland couldn’t take the ride (through suspension) and his five rides on Manikato yielded three victories, including a success in the Queen Elizabeth Cup at Caulfield in October 1981 when Her Majesty was there to present the trophies, a meeting which Higgins subsequently described as one of his greatest thrills in racing.

Higgins always struggled with his weight and eventually gave up the unequal struggle in 1984, having already taken some time out of the saddle to act as advisor to the makers of the movie ‘Phar Lap’. In the subsequent 30 years he became a much-loved father-figure to Melbourne’s racing community, including through his work as a radio pundit and columnist in Winning Post, the country’s principal racing newspaper. He did a huge amount for charity, particularly the Doxa Youth Foundation, and it would be true say that he stood second to none in both the respect and the affection of Melbourne’s racegoers, professional and public alike. 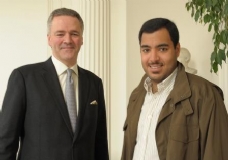 Up Next
QIPCO title partner of Goffs London