Annie Power to take on the World
Stories

The Al Thani family’s QIPCO organisation has been announced as the title partner of the inaugural Goffs London Sale which is set to take place on June 16 on the eve of Royal Ascot.

A leading private investment company in Qatar, QIPCO Holding is also the sponsor of the British Champions Series and Champions’ Day at Ascot.

“Sheikh Fahad and his brothers are excited by the concept of a London sale and are delighted to support what we all hope will become a strong and vibrant fixture in the sales calendar,” said David Redvers, Racing Manager to Sheikh Fahad Al Thani.

“It is a brave step by Henry Beeby and team to grasp this concept and take it forward and it deserves to succeed not just because of the location and timing but also because of it offers the industry another platform.

“We will be working hard with Goffs to make sure the sale and pre-Ascot party goes from strength to strength and particularly look forward to bringing the horses to London in the future. We feel sure it will help bring new people into the game.”

Making the announcement on Thursday at the Orangery at Kensington Palace, the venue for the new sale, Goffs Chief Executive Henry Beeby said: “The Al Thani family have transformed the face of bloodstock sales and racing sponsorship in recent years under the Qatar Racing Limited and Qipco names. It is a privilege for Goffs to be associated with a visionary brand such as Qipco for what will be one of the most exciting and prestigious events on the European sales calendar.

“We are thrilled with the positive reaction from buyers around the world to the Goffs London Sale during recent market visits to Qatar, USA, South Africa and Australia while closer to home it is also creating quite a stir. Goffs London Sale in association with Qipco is firmly in the diary for many international buyers travelling to London for Royal Ascot.”

The select sale will feature two-year-old breezers and horses in training who will be stabled at Kempton Park Racecourse. It is hoped that some lots will hold an entry for that week’s Royal Ascot meeting. 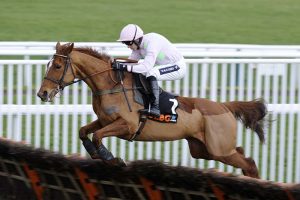 Up Next
Annie Power to take on the World