Despite upheavals in recent months, the Willie Mullins team enjoyed a fine spell over four days of racing at Limerick and Leopardstown, notching a total of 22 winners.

The final day at Leopardstown saw Mullins clinch the Maiden Hurdle with the Andrea and Graham Wylie-owned Battleford and the Grade 3 Mares Hurdle over two and a half miles with Let’s Dance.

The latter was his 14th and final winner at the Dublin-based track, with the familiar sight of Ruby Walsh in the saddle on both occasions.

Surprisingly, 15 looked on the cards when Nichols Canyon lined up for the Grade 1 Ryanair Hurdle at prohibitive odds.

A tremendous front running display by Gigginstown’s Petit Mouchoir ensured that it didn’t, as the grey gelding came seven lengths clear in the hands of Bryan Cooper.

Of the three winners on the first day, Supreme Novices’ hurdle runner-up Min stole the show on just his second start over fences in the Grade 1 Racing Post Novice Chase.

With his main contender Identity Thief pulled up mid-race, the son of Walk In The Park came clear on the run-in by nine lengths advertising his Arkle claims.

The best however was yet come, and it did so in spectacular fashion on Tuesday. Mullins hauled five of the seven races including the first four, with three-year-old filly Meri Devie ousting smart Flat recruit Housesofparliament in the opening Maiden Hurdle.

“He would be potentially the best steeplechaser or horse we’ve had. It’s hard to see us having one better than Hurricane Fly, but he never jumped a fence. I’m hoping this fellow will do more over fences than anything we’ve ever had. He has huge potential,” said Mullins.

He added: “I’m keeping my fingers crossed that he stays sound and we’ll stay on the two-mile route as long as we can anyway. If we decide to go up in trip that will be another day’s work. I’ve no interest in even thinking about it this season. As far as I’m concerned we are on the two-mile route this year.

“I’m just taking it one day at a time and aiming for the next race. I don’t see any need to move off that trip.”

The Susannah Ricci silks had to settle for third in the showcase race the Grade 1 Lexus Chase, as former Mullins in-mate Outlander asserted over Don Poli and Djakadam after the last.

Of the eight winners gained 200km to the west at Limerick, the standout performances came from Belshill in the Grade Novices Chase on Boxing Day and the former James Bethell-trained Penhill, who landed the Grade Guiness Novice Hurdle over three miles. 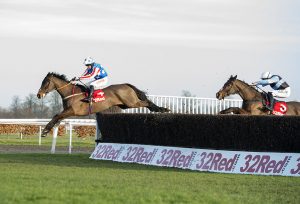