On the second day of Kempton’s Christmas Festival, Special Tiara became the first horse to regain the Grade 2 Desert Orchid Chase, a task made easier by the early departure of his nearest market rival.

The 2014 winner, partnered by regular jockey Noel Fehily, took along his three challengers from flag fall as expected.

Former Champion Chaser and last year’s runner-up, Sire De Grugy, set off in third but got in close at the second flight and blundered Jamie Moore out of the side door, leaving the rider with a bloodied face.

In a race with a much changed complexion, Special Tiara had it much his own way but was gradually closed on by the Tom George-trained Sir Valentino from the fourth last, with the other runner in race Savello way of contention.

Into the straight and over the second last, Sir Valentino got to within three quarters of a length with the favourite still finding plenty on his inner.

However, a blunder from the former tilted the balance in favour of the Irish raider, and despite attempting to close on the short run in, Special Tiara dug in to win the two mile contest by half-a-length.

A man in fine form, this victory was Fehily’s fourth of the afternoon. Thirty minutes earlier he steered impressive young novice and Arkle favourite Altior to a routine third success over fences for Nicky Henderson.

“He’s a lovely horse I’ve had some great days on this fella, I’ve been placed in two Champion Chases on him.”

He added: “It’s great to get another nice race under his belt. I was waiting for that white face to join me, yet I rode Sir Valentino last time and thought he ran a very good race in the Tingle Creek and I did actually think he was one of the main dangers today.”

It’s great to get another nice race under his belt

Placed in the Queen Mother Champion Chase this year and last, Special Tiara continues his fine record this side of the Irish Sea.

The nine-year-old son of Kayf Tara is now a four-time Graded winner over fences.

His Hennessy Gold Cup hero, Native River, became only the third horse in 70 years to win the three mile and five furlong feature with 11st 12lbs.

The six-year-old gelding took up the running after the 10th under champion jockey Richard Johnson.

Having jumped proficiently throughout, he kicked clear from four out and was always maintaining a healthy advantage over nearest challenger Raz De Maree, who could only get within a length and three quarters at the winning post. 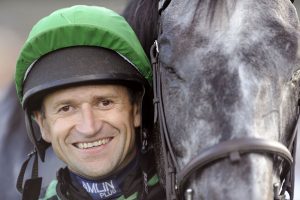 Up Next
Millenium reached